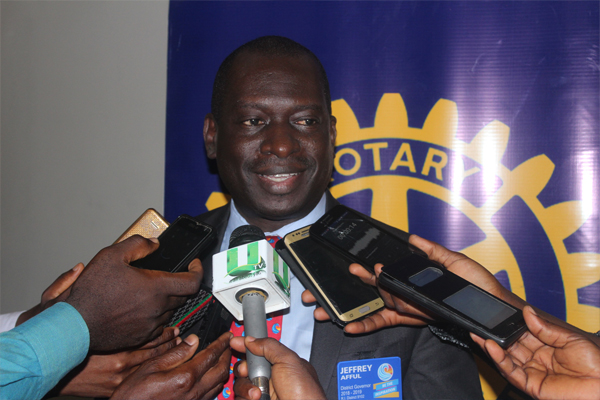 Rotary Club in Ghana has launched its 60th anniversary with a showcase of activities bordering on social change.

Since October 1958 when the first Rotary Club in Ghana was launched, members of the club have used their passion, energy, and intelligence to act on sustainable projects from literacy and peace to water and health.

District Governor of Rotary International District 9102, Jeffery Afful, highlighted the club’s motto “Service Above Self”, which has been evident in the implementation of its six core areas of focus including the promotion of peace, fighting disease, providing clean water, sanitation, hygiene, saving mothers and children, supporting education and growing local economies.

“Projects too many to enumerate have been undertaken by all the clubs in Ghana… the largest Rotary intervention in the health sector in Ghana was  the advocacy of Rotary to get the Ministry of Health of Ghana to adopt the National Immunization Days as the surest way to eliminate polio,” he disclosed.

I can say that by Rotary’s pioneering advocacy role and support for the programme, the last case of polio in the country was recorded 10 years ago,” he stated.

Touching on the issue of punctuality, District Governor, Afful, said the club launched the Punctuality and Time Management project to help wean society off the rather dubious ‘Ghanaman Time’ syndrome under its economic and community development area of focus – a project the club has championed over the years with some significant impact being recorded.

He further indicated that Rotarians believe in ‘one profits most who serves best’ adding that the club was committed to creating inroads with people so that opportunities to serve would arise from those connections.

Rotary is a global network of 1.2 million neighbours, friends, leaders and problem-solvers, who see a world where people unite and act to create lasting change across the globe, in our communities, and in ourselves.

Beginning with the pioneer club, there are now 49 Rotary Clubs in Ghana. The membership of the 49 clubs in Ghana is part of Rotary District 9102 which falls under Zone 20A in Africa.