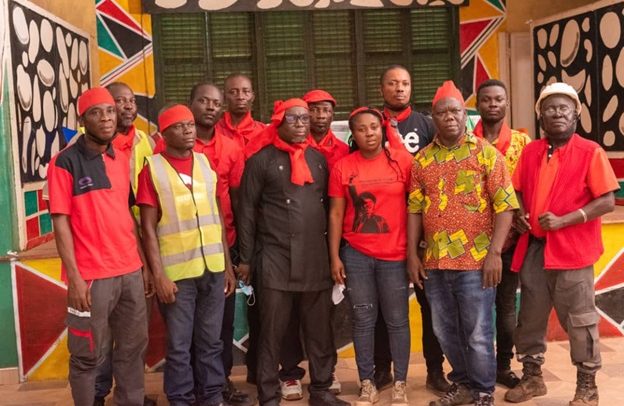 The angry workers in red attires and headbands

WORKERS OF Samatex Timber and Plywood Company Limited in the Western Region have expressed disgust about the activities of illegal miners in a forest the company manages.

According to the workers, the illegal mining activities are adversely affecting the operations of the company.

The workers claimed that the company risks closing down following the invasion by illegal miners, also called ‘galamseyers’, into Tano Nimire Forest.

Addressing the media on the issue, Mark Ofori Asante, National Chairman of the Timber Workers Union (TWU), said the rate at which illegal miners are destroying forest reserves and plantations is alarming.

He said the affected forest reserves and plantations are being managed by Samatex Timber and Plywood Company Limited and other companies.

“This move has helped a lot of less privileged youth from this part of the region become mechanical and electrical engineers among others,” he added.

According to Mr. Asante, the TWU cannot sit unconcerned for illegal mining activities to take place in the Tano Nimre Forest Reserve and other water bodies like the Fure River.

“The illegal miners have been attacking the security guards at the forest reserve,” he stated, and called on the authorities to intervene, to ensure that the illegal activities are stopped.

He said that livelihoods of over 2,500 workers and that of their dependants are under threat if the situation compels the Samatex Company to shut down.

Mr. Asante said as part of its corporate social responsibility, Samatex Company has constructed some road networks and maintaining it for the past 25 years.

“So Samatex has also been embarking on road construction, road maintenance and even bridge maintenance,” he pointed out.

3 Females Nabbed At ‘Ganja’ Base