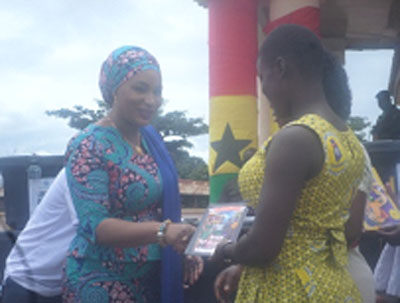 Samira Bawumia present books to pupils in the Wenchi municipality

THE WIFE of the Vice-President, Samira Bawumia last Saturday joined the chiefs and people of Wenchi in the Brong Ahafo Region to celebrate the legacy of Dr Kofi Abrefa Busia.

Addressing the schoolchildren and the gathering, Mrs. Bawumia appealed to all and sundry to influence children to cultivate the habit of reading as it nourishes cognitive development. She said Professor Busia’s scholarly prowess was due to extensive reading. Therefore, she advised the children to emulate him, saying “I’m happy the country is observing International Literacy Day on the 40th anniversary commemoration of the death of the learned professor”.

She said the day which was being observed under the theme “Literacy and Skills Development” was an occasion to remind people of the importance of reading.

Mrs. Samira Bawumia was happy to align her project “Library in a Box” with the day. She indicated that it was her intention to inculcate reading habit in children in order for Ghana to produce future scholars.

She extolled the achievements of Professor K.A. Busia as an academician, a politician and the first African to attain professor status in the then Gold Coast University now the University of Ghana, Legon. She advised the children to read the books wide and take good care of them.