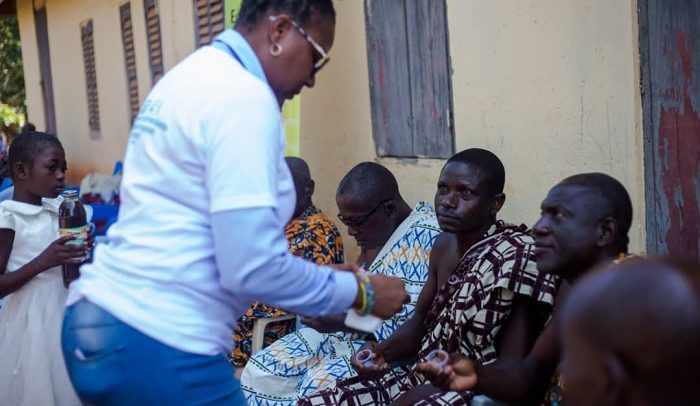 CEO from Syldem, Sylvia Demenya administering the noni Juice during an outreach program

Six communities within the Dodome Traditional Area in the Ho Municipality of the Volta Region have been invaded by sand flies whose painful bites infect victims with the dreadful Leishmaniasis disease.

According to the World Health Organisation (WHO), there are three main forms of Leishmaniases – Visceral (also known as kala-azar and the most serious form of the disease), Cutaneous (the most common) and Mucocutaneous.

The Visceral Leishmaniosis is fatal if left untreated. It is characterized by irregular bouts of fever, weight loss, enlargement of the spleen and liver and anaemia. Cutaneous Leishmaniasis causes skin lesions, mainly ulcers, on exposed parts of the body, leaving life-long scars and serious disability or stigma. Mucocutaneous Leishmaniasis leads to partial or total destruction of mucous membranes of the nose, mouth and throat.

Some residents confirmed that the bites have caused red bumps, blisters and inflammation of their skin.

Residents of the area have called for an urgent permanent solution to the recurring invasion.

A resident, Atse Agbo said the several traditional and orthodox methods to rid the community of the bloodsucking-sand flies have failed to eliminate them.

To this end, residents are appealing to government and other benevolent organizations to assist with frequent fumigation or any measure necessary to save them from their all year round predicament.

Residents, suspect that the chain of mountain with thick vegetation surrounding the six Dodome communities serve as a good breeding grounds of the insects; particularly the holes in the many trees of the thick vegetation. “The situation is beyond us; difficult to manage. We need help,” Aku Nuedzor, a resident and mother of three, appealed.

They also noted that many of them were terrified by the situation, especially when the rainy season sets in; the period when their numbers increase.

The residents have however expressed gratitude to the Danish Embassy and the Syldem Company who through a “Let’s Prevent Leishmaniasis” project, have been assisting with some medication which is helping treat the infected.

The CEO of Syldem Company Limited, Sylvia Demenya explained that the project which was initiated to curb the spread of the disease included a research into the rich chemical composition of the noni fruit which was found to be a possible treatment for Leishmaniasis.

Apart from that project, another entity, Exa Ventures, has produced some lotions and creams with the natural extracts from the noni fruit; some of which have been distributed to the residents to repel the sandflies from biting them while the noni juice produced by Syldem deals with killing the Leishmaniasis parasites deposited in their body.