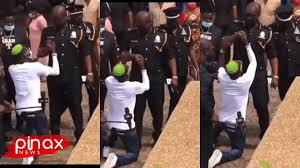 There was nasty spectacle at the Police Headquarters when dancehall artiste, Charles Nii Armah Mensah, popularly known as Shatta Wale was seen storming out of a meeting initiated by the Inspector General of Police (IGP), George Akuffo Dampare.

The unfriendly spectacle exhibited on Wednesday November 10, 2021 by Shatta Wale who walked out on the top hierarchy of the Ghana Police Service and stakeholders in the creative arts sector.

He was obviously seen in angry mood when expressing his displeasure over what he terms as unfair treatment.
The dancehall artiste later apologized to the top brass of the police over his unruly conduct.

The Ghana Police Service has been holding meetings with various stakeholders in the country.

Recently, there was a meeting with religious groups before meeting editors and media managers as well as CSOs.

Yesterday’s meeting was the turn of the creative arts sector and Shatta Wale was also invited as one of the entertainment personalities.

Information available to DGN Online indicates that Shatta Wale was stopped from filming the proceedings, a move which provoked him.

The musician claimed he had seen some of his colleagues also filming the meeting freely with their mobile phones and they were not stopped but why he alone was singled out and stopped.

He got angry and reportedly spoke harshly to the police officer in the presence of the IGP, senior police officers and other creative industry persons at the gathering.

Shatta Wale was later seen leaving the conference room as discussions were ongoing by the persons in attendance.

Before the meeting, Shatta Wale was seen making noise at the Police Headquarter, saying: “I’ve come here, and I’m sitting down; people are taking out their phones. Me alone [when] I took out my phone, some policemen wanted to stop me”.

Shatta Wale recently had a brush with law and was remanded at the Ankaful Prison for allegedly publishing false information about an assassination attempt at his residence.

He pleaded not guilty to the count of publication of false news that caused fear and panic in the public domain together with three others who appeared in court with him- Kojo Owusu Koranteng, Shatta’s personal assistant; Eric Vanetor, a graphic designer; and Iddrisu Yussif, a beautician; were charged for abetment of crime and publication of false news.

Police said preliminary investigations revealed that the widely reported gunshot attack on Shatta Wale on Monday, October 18, was a hoax.

He was later granted a GH¢100,000 self-recognisance bail, alongside three others, after appearing before a court in Accra.