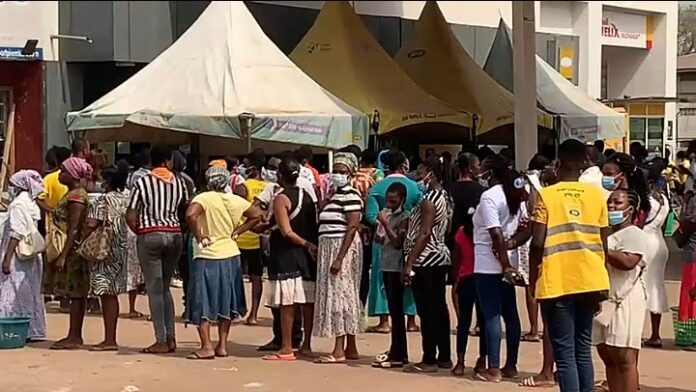 Although the National Communications Authority’s (NCA) monitoring of the frustrations and grumblings of customers took too long, the measures announced to address the pains are as heartwarming as they are promising.

With the interventions expected to start today, it is our hope that the queues which featured in almost all the customer centres of especially the MTN would no longer be noticed.

The tone of our commentary would have been different had the interventions not been announced.

Until the interventions, the frustrations were nearing rooftop and we could only wonder whether something was really in the pipeline to address the eyesore at the facades of the mobile network customer centres.

In a digitised age and available IT applications for the management of such tasks as SIM re-registration, what we went through until the announced directives was avoidable.

The high decibels of complaints were deafening and should have been foreseen. From today, our attentions would be riveted on how things pan out against the backdrop of the interventions.

It behooves the Mobile Network Operators to tell us where in our neighbourhoods people can go and complete the biometric segment of the re-registration exercise.

Identifiable public offices should be included in the list of locations where the operators would pitch their re-registration centres.

We do not want to witness anymore queues in any registration centre. Those who are given codes to return on specified dates should do well to abide by these so that the exercise would be bereft of the nasty spectacles witnessed previously.

The issue of proof of ownership of SIMs where there are slight variations in the details such as order of names in the Ghana Card and the former, is another knotty kettle of fish. Customers are sometimes asked to go back to the NIA for rectification and this comes with its peculiar inconveniences.  While we insist that proof of ownership should be established before the completion of the re-registration process, the inconveniences should be minimised.

We also noticed the wish by some concerned customers that the physical appearance for the re-registration process  should be avoided.

This wish is a clear indication that such persons do not understand the essence of the exercise. An elaborate media campaign in the various languages about the importance of the exercise is necessary. It is not too late to do that now.

The prevalence of IT fraudsters who steal identities to defraud vulnerable persons is something which can only be stopped through a successful re-registration of SIM numbers.

The linkage between the Ghana Card individual numbers and the SIM re-registration is a wonderful idea which is hardly understood by many. Little wonder such ignorant persons question the need for the exercise at all.

They would have appreciated the importance of the exercise had they fallen victim as others have, to the machinations of fraudsters.

Digitisation has made life so easy for us. Today, we are able to move about cashless, our mobile wallets serving as the repository of our monies. Under such a cashless space, the need to secure our monies and transactions can only be assured through a re-registration exercise such as being undertaken currently.

This should be done bereft of avoidable hassle using the magic of IT anyway. With the announced NCA measures, we do not want to see queues at customer centres from today and we expect the NCA to monitor and to intervene quickly where necessary.