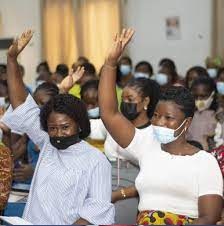 SOME 225 women entrepreneurs have received training from a mentorship programme organised by the Sinapi Aba Savings and Loans (SASL).

The mentees, who were drawn from Ashanti, Central, Eastern, Western, Western North, Bono, Bono East, Greater Accra, Volta and Northern Regions, were taken through a six-month to gain the practical skills, knowledge and tools necessary to transition and improve their entrepreneurship practice and business.

The programme, themed, “Mentoring the Next Generation of Great Women,” was to help the beneficiaries achieve their business goals, build wealth and independence as well as empower them to create a better future for themselves and their families.

The mentees were also taken through proper record keeping, planning in business, innovation and creativity in business, and how to guide against fraud as well as stock control.

Chief Executive Officer of SASL, Tony Fosu Gyasi, said the company was committed to developing Ghanaian women to become part of the major players in the entrepreneurship sector.

He pledged SASL’s continuous support towards development of more women, noting that the company will mobilise the business professionals to generously donate their time and share their experience as mentors.

He urged the beneficiaries to make good use of the skills to create a major impact for communities and economies, while driving towards positive and sustainable development.

Chief Programme Officer of SASL, Joyce Owusu-Dabo, said the company had directly supported several women to grow and strengthen their businesses, and in turn support their families and communities.

According to her, the SASL’s ambition was to help reduce poverty among women, especially those in the rural areas, who represent about 65% of the mentorship project target.

Mrs Owusu-Dabo seized the opportunity to commend the Canadian Government through its agencies – Global Affairs Canada and Opportunity International Canada – for their support towards the mentorship programmes.

A board member of SASL, Theodosia Jackson, charged the beneficiaries to remain disciplined for business growth.

The beneficiaries were given the opportunity to share their successes, and the best three mentees and their mentoring teams were given cash packages ranging between GH¢500 and GH¢1,500.