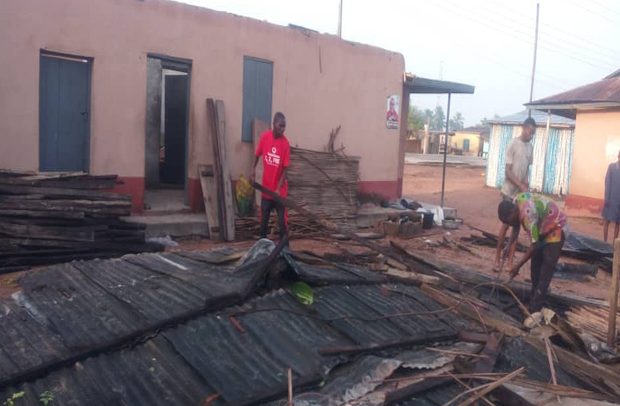 One of the affected homes

About 200 residents in the Sokode Traditional Area have been left stranded following the destruction of about 40 houses by a heavy rainstorm recently.

The affected people are residents of three Sokode towns namely Sokode Gbogame, Sokode Bagble and Sokode Ando, where a three-unit kindergarten classroom block with toilets and a staff common room was also affected.

All the 40 houses and the school had their roofs ripped off by the rainstorm. Properties of residents were destroyed, including teaching and learning materials of the school.

The storm, which preceded a heavy rain, occurred last Wednesday evening. Apart from displacing residents, it also led to the injury of at least three people and some children.

The affected residents have since been counting their losses and making efforts at rebuilding their homes; they are currently putting up with friends and relatives in their respective communities and adjoining ones.

Most of the affected residents who spoke to DAILY GUIDE said their rooms were flooded due to the destruction of their roofs; hence most of their belongings had been completely damaged. Some of the items destroyed include mattresses, chairs, phones, TV sets, radio sets, documents, just to mention a few.

One of the injured, a 75-year-old man, Francis Asitor, appealed to government and the public to come to his aid and others who had been affected. He said he got injured when a concrete block fell on his leg when he was finding refuge after the collapse of his ceiling.

The headmistress of the affected school, Sallah Victoria, said despite the disaster, he and the staff were doing their best possible to keep more of the children in school so that they can prepare for the upcoming end of term exams.

That notwithstanding, she had reported the tragedy to the Municipal Education Directorate for further action.

The Assembly member for the area, Ericson Ganyo, who was worried about the situation, said he had spoken to the Ho Central Member of Parliament, Benjamin Kpodo and the Regional National Disaster Management Organisation (NADMO) office for assistance.

The Regional Director of NADMO, Divine Bosson, assured the community that his outfit would, as a matter of urgency, fix the classrooms to keep the children safe.

Therefore, his office has made provision for 16 bundles of roofing sheets with nails. Pencils of Promise, an NGO, which built the facility, has also promised to donate wood after having a meeting with Mr. Bosson.

Mr. Bosson said since his outfit is constraint, he is in talks with the assembly and artisans in the community to assist with labour so that the pupils can be safe.

Apart from that, reports have been sent to the head office to assist the affected households within the shortest possible time.