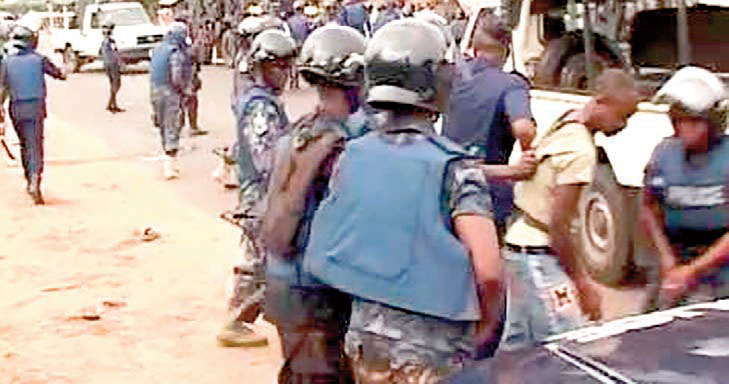 Some of the suspects being rounded up during the joint operation

Hundreds of soldiers and police officers yesterday undertook a dawn operation at Budumburam in the Central Region, specifically descending on the Liberian Refugee Camp to rid the area of suspected criminals.

The joint operation is a glaring response of the national security apparatus to the recent murder of two police officers as well as the gruesome killing of a chief at Akranman recently, and the subsequent public outcry about how the area is now a haven for criminals of all sorts.

Four hundred (400) soldiers and 200 police officers armed in battle order were engaged in the operation which won the applause of law-abiding residents who have been yearning for such an operation.

There was nowhere to hide as 50 vehicles including armoured cars and security personnel directed their attention on an assortment of criminals within the area.

Later, a statement from the Police Public Affairs Directorate on the subject described the operation as “a special exercise which is part of efforts to ensure total security in the country.” Continuing, the statement said “the security agents are taking the fight to the doorstep of criminals” explaining that measures such as “cordon and search, swoops, intelligence-led operations, among others” shall be employed.

On the achievement of the exercise, the police stated that “a total of 141 suspects including 15 females were rounded up during the operation and were all brought to the Police National Headquarters for screening. Those found culpable shall be taken through the legal process.”

The police have solicited for vital information in what they said would be a nationwide exercise.

An excited resident who witnessed the operation and the success it chalked up could not hide his sentiment as he gave plaudits to the security personnel.

“We are happy that this swoop has taken place. The place is fraught with criminals and it is making it unsafe to live here. If police and military do this exercise every week, we shall be happy,” he said, adding that he was unhappy that the criminals in the area had given law-abiding residents a negative tag.

He said the few miscreants deal in drugs, fraud, robbery, prostitution and all sorts of criminal activities, adding “you can’t move at night especially at dawn. You will be robbed at gunpoint.”

In his reaction to the murder of the two police officers, the Chief of Gomoa Budumburam, Nana Kojo Essel II, recently expressed worry about the poor state of security in the area.
The segment of the area allocated for refugees from Liberia, he said, is now a haven for criminals.

He said it had become a daily ritual for him to bury dead bodies with their parts lost adding that there was a self-imposed curfew in the area at dusk because residents fear being attacked by criminals.
“I have to bury dead bodies abandoned in the area. Most of the corpses have missing body parts; obviously they used them for ritual purposes.
The police are even afraid to go there because these armed robbers, mostly Ghanaians, have taken over the camp,” he lamented.

The Liberian Camp, he said, had outlived its usefulness and must be dismantled.

Gomoa Budumburam adjoining Kasoa, both in the Central Region, made negative headlines when some elements in the area murdered two police MTTD officers two weeks ago.
So gruesome were the murders that the story attracted a nationwide attention.

As if it that was not enough, Ghanaians woke up to the murder of a sub-chief at Gomoa Akranman, Nana Yaw Egyir, over a land dispute. The crime scene is also in the general area of Budumburam.

Soon after the murder of the two police officers and public expressions about how some law enforcement agents had compromised their office, the acting IGP instituted a probe into the allegations.