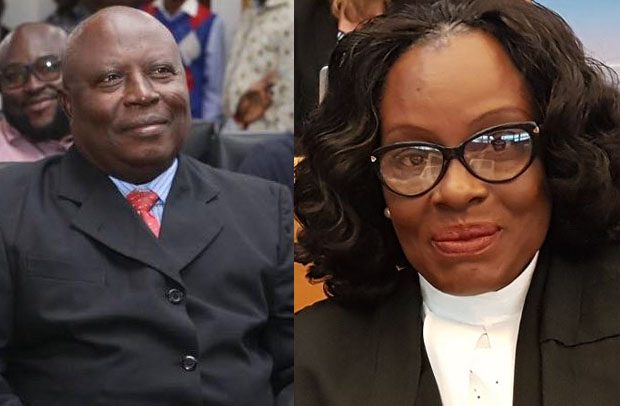 Special Prosecutor Martin A.B.K. Amidu has dragged the Attorney General (AG), Gloria Afua Akuffo, to the Supreme Court over the ‘failure’ of her office to enforce a Supreme Court order  that says it should retrieve 47 million Euros fraudulently paid to Waterville Holdings (BVI) Limited, a company belonging to businessman Alfred Agbesi Woyome.

According to the suit, unless the court ‘compels’ the AG to enforce the order and also Woyme’s company is ordered to comply and pay the full amount of debt, the labour and expenses exerted by him as the plaintiff on behalf of Ghanaians would go in vain.

Mr. Amidu’s suit comes at a time the AG has made frantic efforts to recover all monies paid to Woyome as some of his residential property are about to be auctioned to offset the debt.

Attached to the suit are Waterville Holdings (BVI) Ltd as the second defendant/respondent/judgment debtor and Woyome as third defendant.

The Supreme Court on June 14, 2013 ordered Waterville Holdings (BVI) Ltd to refund all monies paid to it by the National Democratic Congress (NDC) government as judgment debt over the termination of an ‘illegally’ awarded contract for rehabilitation works on the Accra Sports Stadium for the AFCON 2008 hosted by Ghana.

The Office of the AG under the John Mahama administration was, however, reluctant to retrieve the debt and subsequently delayed the processes of seeking direction from the court regarding the enforcement of the orders.

Woyome then instituted an action at the International Court of Arbitration against the Government of Ghana, challenging the decision of the Supreme Court for his company to refund the money.

The Court of Arbitration on March 30, 2018 dismissed the case on grounds of lack of jurisdiction to declare that the contract based on which he was paid the judgment debt was valid and that the Government of Ghana is not entitled to a refund of the money.

Woyome also went to the African Court on Human and Peoples’ Rights based in Arusha, Tanzania, where he filed a case against Ghana for breach of his fundamental human rights.

In a unanimous decision, the court held that Mr. Woyome’s right to non-discrimination, right to equality before the law, equal protection before the law and his right to be heard by an impartial tribunal had all not been violated.

Currently, Mr. Amidu is seeking an order for the AG to enforce the original order for Woyome to refund the full amount of €47,365,624.00 (excluding interest thereon).

According to him, it has been more than a year since the Arbitration Tribunal brought the arbitration proceedings to an end and although the ruling is in favour of Ghana, the Supreme Court’s orders are yet to be enforced.

He said the Supreme Court should order the AG “to enforce the refund of all the total Judgement Debt of €47,365,624.00 (excluding interest thereon) and for the 2nd Defendant/Respondent/Judgment Debtor to obey and carry out the orders and direction of this Court contained in the judgment, orders, and directions of the Court made in favour of the Plaintiff/Applicant herein on behalf of the people of Ghana against the 2nd Defendant/Respondent/Judgment Debtor on 14th June 2013 pursuant to Articles 2 and 129 (4) of the 1992 Constitution after the conclusion of the International Chamber of Commerce Arbitration Case No.20562/TO and the issuance of the Order for Termination of the said arbitration in four of the Republic of Ghana on 30th April 2018…”