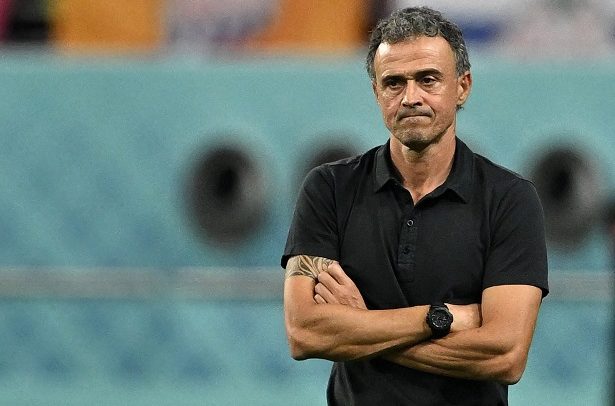 Spain announced the departure of Luis Enrique as coach of the national team yesterday following the team’s shock penalty shootout defeat on Tuesday to Morocco in the round of 16 at the World Cup in Qatar, and his replacement was named.

The former Barcelona manager, whose contract with Spain was set to end this month, took full responsibility for his team’s earlier than expected exit from the tournament.

The Spanish FA announced that Luis Enrique would be replaced by Spain U-21 manager Luis de la Fuente. De la Fuente, 61, guided Spain’s U-19 side to a European Championship title in 2015 and led the under-21s to the same honour in 2019, while he was in charge of the team that won a silver medal at last year’s Tokyo Olympics.

A statement from the Spanish FA said: “The RFEF would like to thank Luis Enrique and his entire coaching staff at the helm of the absolute national team in recent years.

“The RFEF has chosen Luis de la Fuente as the new national coach. The sporting director, Jose Francisco Molina, has transferred a report to the president, Luis Rubiales, in which he recommends the coach to lead the new chapter that begins after the World Cup in Qatar.

“The RFEF board of directors must approve the appointment next Monday.”

De la Fuente will be introduced then, at 12:30 local time.

The announcement of Luis Enrique’s departure comes as no surprise. Luis Enrique had said in the aftermath of Tuesday’s loss to Morocco after a goalless draw that he would discuss his future with Spanish Football Federation president Luis Rubiales next week. However, pressure mounted on Luis Enrique, with fans and national media calling for his resignation after what they described as a “fiasco.”

Spain players wanted Luis Enrique to continue as coach and had spoken out in his favour.

Luis Enrique, 52, guided Spain to the semifinals of Euro 2020 and the final of the Nations League in 2021, and recently steered La Roja to the final four of the 2023 Nations League.