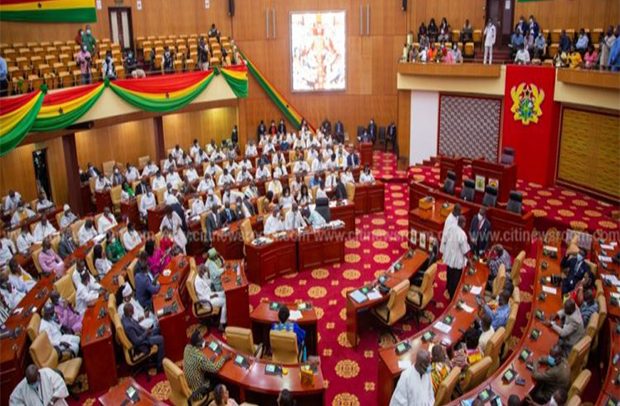 LAWMAKERS FROM the ruling New Patriotic Party (NPP) yesterday stormed out of the parliamentary chamber to avoid taking part in a vote to censure Finance Minister, Ken Ofori-Atta, describing it as a misadventure.

The near-hung parliament was deliberating the report of the Ad-hoc Committee set up to investigate opposition NDC allegations contained in the censure motion to get Mr. Ofori-Atta removed from office.

The committee, which was co-chaired by NPP MP for Adansi-Asokwa, K.T. Hammond, and NDC MP for Bolgatanga East, Dr. Dominic Akuritinga Ayine, had examined five grounds (charges), including illegal payments, unethical contracts, misreporting of data, and fiscal recklessness against the minister, and laid it report in the House on November 25, 2022.

Speaker Alban Bagbin set the stage for the dramatic showdown of the debate on the report, which exercise, the Finance Minister himself and the Attorney General and Minister for Justice, Godfred Yeboah Dame participated fully.

The walkout eventually led to the loss of the censure motion as 134 MPs voted in favour of it, making the House unable to meet the constitutional threshold of two-thirds of the 275 MPs.

The NPP MPs indicated that they were washing their hands off the decision to censure the minister because their Minority counterparts were trying to take Parliament on a tortious path, after peddling “falsehood and untruths” against the minister.

“You want us to go with you. He (Haruna) didn’t point out which ones are true and which ones are false. On this misadventure, like Pontius Pilate, we will wash our hands,” he stressed.

Earlier, the Attorney General and Minister for Justice, Godfred Yeboah Dame, had raised issues that impinged on the legitimacy of the process that was undertaken by the Ad-hoc Committee.

“And it was with great alarm and dismay that I heard a co-chair of the Ad-hoc Committee described the committee’s work as a constitutional political process, and not a quasi-judicial process,” he stated.

He continued, “Indeed, the Co-Chair, Dr. Dominic Ayine, indicated that the exercise undertaken by the committee was not a quasi-judicial process and that it was engaged in what I describe as an amorphous constitutional process.”

According to the AG, the Speaker’s ruling made on November 10, 2022 was so clear that the committee was constituted under Standing Order 201 and guided by Order 106.

“A perusal of Standing Order 106 leaves one in no doubt all the processes set up under the Standing Order constituted the work of the Committee to a quasi-judicial process,” Mr. Dame stated.

“I am of the view that it is actually in respect or a case of misapprehension by the committee or by the co-chair of the nature of work to start with that certain fundamental rights were grossly violated,” he submitted.

He referred to the request by the Minister of Finance for the production of documents and full particulars that he required to enable him to assist in his defence.

“The committee noted at page 5 of its report that in a letter dated November 15, 2022, the minister requested particulars of the facts of each of the allegations and the relevant documents in support of the allegation.

“The respondent made the request in the exercise of his right to fair hearing guaranteed by the Constitution. The committee considered the request and noted that even though the request was legitimate, it was impracticable in the life of the time granted to the committee to report to Parliament,” he quoted from the report.

He argued that this was where the committee got its work wrong, adding, in the circumstances, the committee sacrificed justice and due process on the altar of expediency and convenience.

“That for me, is unconstitutional and rendered the whole exercise a nullity,” the AG pointed out on the floor of the House.

“Full particulars to enable the minister to have a proper defence to the action will constitute the setting out to the allegations against the person; and to the particulars and not what they described as grounds of the allegation.

The Finance Minister, Ken Ofori-Atta, in contributing to the debate, said he had done “nothing amiss,” adding, “In future, such censure will have more thoroughness and will be less politically motivated.”

“Us we talk about the issue of recklessness, mismanagement, conflict of interest. And also remind ourselves of our COVID-19 experience of the Ukraine war.

“And also, let us ask ourselves the lack of recklessness, mismanagement and lack of these events, I ask my colleague who used to be at the ministry what happened in 2015 for them to run to the IMF?” he quizzed

“No recklessness, no mismanagement, no COVID-19, no Ukraine war, and Mr. Speaker, President Akufo-Addo’s government had come and bailed them out, and we did so successfully,” he intimated.

According to him, “For the loud and urgent voices seem to have prevailed, that even if I said the shout for censure, censure and censure, I believe, Mr. Speaker, shall forever ring in the ears of those who signed this censure.”

“And their conscience and their souls, censure will ring as crucify, crucify in their minds. I believe it has been sifted. This then is not a very good hour and it is truly an hour of darkness,” he concluded.