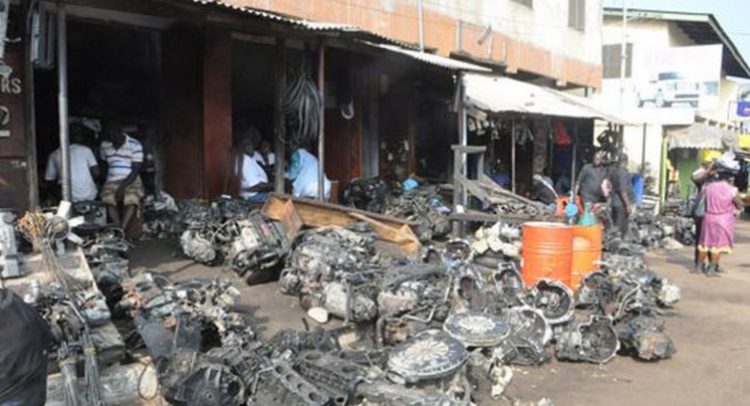 A GROUP that calls itself the National Concerned Spare Parts Dealers (NCSPD) has threatened to stage a demonstration in two weeks should government fail to rescind its decision to relocate traders from Abossey Okai to Afienya in the Greater Accra Region.

Government, through the Greater Accra Regional Coordinating Council (GARCC), has announced its intention to relocate spare parts traders from their Abossey Okai station to a place in Afienya.

The relocation, which falls under the GARCC’s Let’s Make Accra Work agenda being spearheaded by the Regional Minister, Henry Quartey, forms part of efforts to decongest the capital, especially the Central Business District (CBD).

The Regional Minister is said to have had an agreement with the leadership of the traders following series of engagements between the traders and the GARCC.

However, the group, at a press conference on Tuesday, resisted the move and accused the leaders negotiating on their behalf of lacking capacity and also on grounds that they are interim executives. The group has therefore expressed its resolve to resist the relocation.

Public Relations Officer (PRO) of NCSPD, Takyi Addo, said: “The supposed executives who agreed to the relocation proposed by government are interim executives. Their tenure of office has long expired. They had no authority to speak on our behalf and their views are not a reflection of ours.”

Mr. Addo urged government to come up with proposals that would help their businesses to thrive, “instead of these unnecessary ones.”

In a related development, the Abossey Okai Spare Parts Dealers Association, the officially known body of spare parts dealers, has alleged that the agitations were being fuelled by landlords who feared their businesses would collapse following a potential relocation.

“Those who are agitating against this project are those who have shops here and investments. There are about twenty of them. These individuals are hiding behind the so-called National Concerned Spare Parts Dealers, who are about five in number, to air their views.”

He also claimed that “when this issue started, the landlords approached us about the fate of their investments and we allayed their fears, explaining that not all the traders are being forced out, and that some would [still] remain here.”