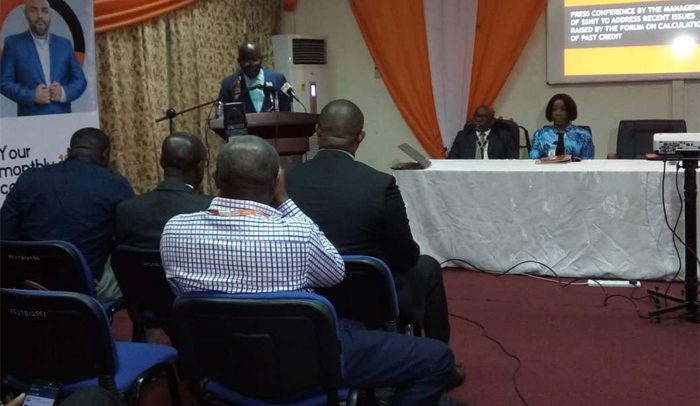 The Social Security and National Insurance Trust (SSNIT) has set the records straight on the payment of past credit.

It would be recalled that the Forum for Public Sector Registered Pension Schemes, had at a press conference on September 12, 2019, accused SSNIT of delaying the implementation of the modalities for the past credit.

The Forum had indicated that the Trust was reluctant to “come out with modalities for the calculation on past credit earned as of December 2009, based on a 100 percent Treasury bill rate, compounded quarterly and the issuance of statements to each contributor.”

A past credit is the contribution of workers to the Trust before the coming into existence of Act 766.

Director General of SSNIT, Dr. John Ofori-Tenkorang, addressing journalists at a press conference on Thursday, November 28, 2019, in Accra, to respond to the claims made by the Forum, said, the Trust would not move beyond the law in paying past credit.

He emphasized “that should this directive, which is not in accordance with Act 766 be implemented, the Trust’s Past Credit liability will increase to a whopping GH¢ 5.87 billion as at October 2019 representing an increase of GH¢ 4.5 billion over what the liability was before the revision that was accepted in the communique was implemented.”

The Director-General noted that “the effect of this directive will put the whole SSNIT Scheme into financial crisis mode from 2022 as the fund ratio will drop from 3.1 to 0.3. This will affect the long term sustainability of the scheme.”

According to him, the implementation of the 3-tier pension scheme provided for the Trust (first tier operator) to pay monthly pensions and the second tier fund managers to pay lump sum which was being paid by the Trust under the Social Security Law (PNDCL247).

However, he said, there were workers affected by the Act 766 who as at 31st December, 2009 (i.e. the eve of the implementation of the Act 766), had contributed to the SSNIT Scheme.

The Director-General explained that this meant that they had contributed 17.5 percent of their salaries to SSNIT which was 4℅ more than the current 13.5℅ out of which 2.5℅ is forwarded to the National Health Insurance Authority.

“This 4℅ of salaries accumulated with interest from the dates on which the contributions were received by the Trust, up to 31st December 2008.”

He added that “this past credit plus additional accrued interest from 1st January 2010 till the date of retirement is what is paid to the member by SSNIT as part of their lump sum. The rest of the lump sum is paid by the private tier-2 fund managers.”

According to him, the proposed formula for the computation of the past credit as at 31st December, 2009 dealt with two issues.

The issues, he said, included the percentage of annual salary that was to be used (being 4℅) and the interest rate that should be applied to those contributions up to 31st December, 2009.

He could not fathom why the matter came up again as it has been discussed in the past among stakeholders including SSNIT, the National Pension Regulatory Authority (NPRA).

“During these deliberations, SSNIT was asked to submit papers to the NPRA on how the Past Credit should be calculated for the review,” he recounted.

He also recounted that a Ministerial Committee was formed in September 2017 to resolve outstanding issues relating to funds TPFA 2 to the four public sector occupational pension schemes and one of the terms of reference for the Committee was to “discuss and make recommendations on the issue of Past Credit.”