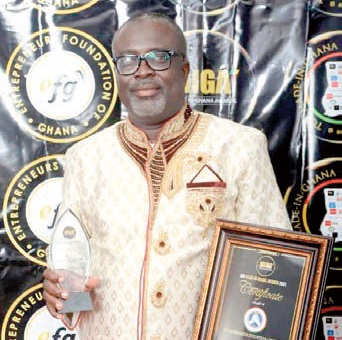 The St. Andrews Group of Schools and Companies has been adjudged the best educational services provider in the country, recognition which was announced during the ninth edition of the 2022 Made-In-Ghana Awards organised by the Entrepreneurs Foundation of Ghana (EFG) last Friday in Accra.

In the educational services category, St. Andrews Group of Schools emerged first among five other schools in the country.

The group has been noted for providing quality secondary education, nursing and media training among others.

The Made-In-Ghana Awards 2022 seeks to recognise the outstanding contributions of selected Ghanaian businesses and entrepreneurs.

Prof. Richard Kofi Asiedu, CEO of St. Andrews Group of Schools and Companies, while receiving the award on behalf of the Group commended the hardworking staff and individuals who have continuously supported the Group to achieve such feats over the years.

He assured Ghanaians that the Group will not relent in its efforts to serve humanity through quality educational services in the country.

Nana Dokua Asiamah Adjei, Deputy Minister of Trade and Industry and Member of Parliament for Akuapem North, in an address, also commended the Group  for their contribution towards  the growth of the Ghanaian industry despite the global economic challenges facing businesses.

She, however, appealed to them to support young entrepreneurs as this support may also go a long way in reducing the unemployment rate in the country.

For his part, the chairman for the event and a former Deputy Minister of Trade and Industry, Robert Ahomka Lindsay, applauded the effort of the organisers of the award for recognising the work of individuals who have made a mark in the socio-economic development of the country, adding that the awardees could only become global icons and remain competitive only when they continuously work on their brands.

Amongst some of the companies that were awarded for their outstanding contribution towards the promotion of made in Ghana goods  by the Foundation include GCB Bank, Ghana Ports and Harbours Authority, GOIL, Central Furniture Works and other individuals such as Nana Pra Agyensem VI.

Other awards presented include Pride of Ghana award and Personality and Hall of Fame award.

The ceremony brought together some members of the diplomatic corps and Ministers of State amongst others.