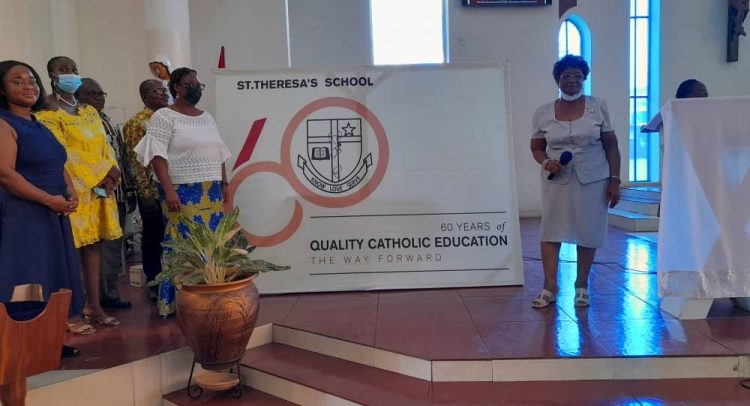 The year-long celebration is on the theme, “St Theresa’s School: 60 Years of Quality Catholic Education, the Way Forward.”

The Metropolitan Archbishop of Accra, Most Reverend John Bonaventure Kwofie, at the launch urged the teachers to work with integrity.

He said, as teachers, instilling in children good values of life is the best legacy they can build on for the future.

The archbishop said after the establishment of the school in 1962, it has churned out successful personalities who are contributing to building the nation in various capacities.

“Today, the school can boast of past students who are into various fields, including doctors, lawyers, teachers, priests and various other fields both home and abroad,” he said.

In a welcome address by Rev. Sister Chris-Sheila Damalie, she said 60 years ago, that mustard seed sowed by Sister Francetta Kunkel has grown to become one of the best catholic private schools in the country.

“With 60 pupils, the school was started with two rooms at a site located at the church, and her main purpose was to educate the children in the locality, academically, spiritually and morally.

“After the school started expanding, the then Town and Country Planning Department warned that the school cannot be at the location of the church, and so with the help of the Ankrah Royal Family, it was moved to its current location,” she added.

Activities lined up for the celebration include Career Day with selected old students, a day out for all teachers to a tourist site, a talk on the selection of SHSs, educational excursions, donations to HDR Orphanage, Kaneshie Polyclinic, Childhood Cancer Centre, Korle-Bu, appearance on TV/Radio, write-ups in selected newspapers, and homecoming for old students.

It will be climaxed with its 60th anniversary awards, speech and prize giving day in October, quiz among six sister schools, unveiling of the bust of Sister Francetta and the thanksgiving mass.