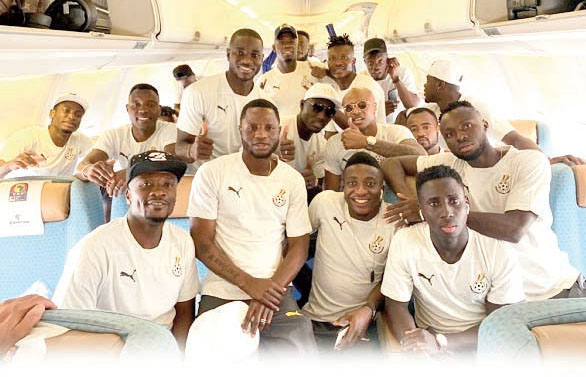 The Stars on board from Dubai

The Black Stars have landed at their Group F base, Ismailia, after three weeks of preparation in Dubai for this year’s African Cup of Nations (AFCON) which started yesterday.

Led by Coach Kwasi Appiah, the playing body and the technical staff will play two of their group games in Ismailia before moving to Suez for another game.

The three days to their Group F opener offer the Appiah men an opportunity to smoothen any edges in the team.

Ghana, who lost 0-1 to Namibia and drew goalless with South Africa in test games, will start the campaign against West African neighbours, Benin on Tuesday.

The four-time African winners are housed in Group F together with   Cameroon, Guinea Bissau and Benin.

The Stars have not won the title since 1982.

The City Of Ismailia
Ismailia is a city in north-eastern Egypt. Known in Egypt as ‘The City of Beauty and Enchantment’, Ismailia is situated on the west bank of the Suez Canal, the capital of the Ismailia Governorate. It has a population of 400,000. It is a little over an hour drive from Cairo, the capital.