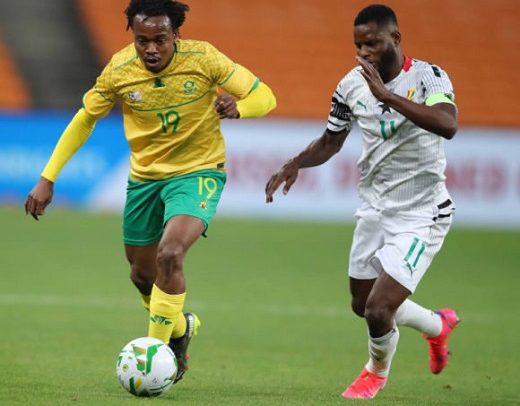 Hugo Broos recorded his first victory as head of the Bafana Bafana since he took over the team.

Bafana Bafana gaffer Hugo Broos made two alterations to the squad that held Zimbabwe to a scoreless stalemate last Friday in the opening game.

The 20-year-old defensive midfielder Ethan Duncan Brooks earned a starting place for the first time in place of Gift Links.

Yaw Yeboah, Majeed Ashimeru and Joel Fameyeh were all given their very first competitive starts in Ghana shirt.

Jonathan Mensah returned to the starting lineup for the first time in a long while.

Ghana attempted only a shot at goal in the entire 45 minutes while the Bafana Bafana failed to trouble the Black Stars defence despite having four attempts at goal.

Percy Tau found the back of the net with a fine header in the 38th minute following a free-kick but his effort was ruled for offside.

South Africa finally got the breakthrough seven minutes from full-time after the Ghana defence failed to deal with a cross from the right.