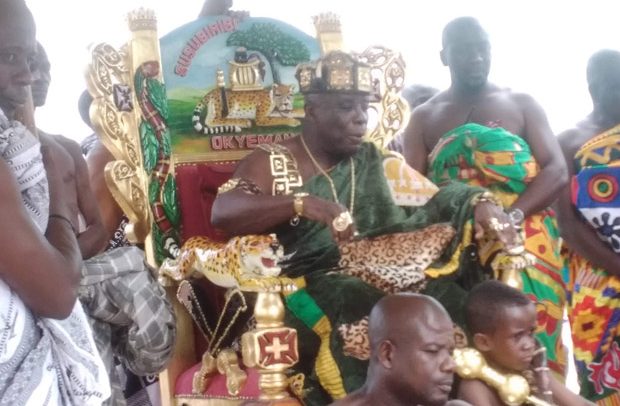 THE OKYENHENE, Osagyefuo Amoatia Ofori Panin, has cautioned politicians against their disrespectful behaviour towards traditional rulers.

He said such tendencies could retard progress. According to him, because of politics, anybody at all can just wake up and use unprintable language on a traditional leader and get away with it.

The Okyenhene was speaking over the weekend at a special programme he hosted for the Asona Clan as part of his 20th anniversary celebration activities at the Ofori Panin Fie at Kyebi in the Abuakwa South Municipal in the Eastern Region.

The gathering brought together all the Asona Clans across the country, mostly chiefs and prominent elders, who met to establish an educational fund to help the needy but brilliant students, and also shared ideas for the progress of  Okyeman.

The Okyenhene said the insults in the body politic is too much, adding “that was not how we were all brought up. If Ghana will develop, it will depend on all of us. We should all play our roles well and the country will become prosperous.”

He said a country where there is no respect for authority and its elders does not see progress.

He advised men especially from the Asona Clan who are in the habit of impregnating women indiscriminately without any planning to put a stop to it, adding “Asona men are noted for their responsibility towards their families.”