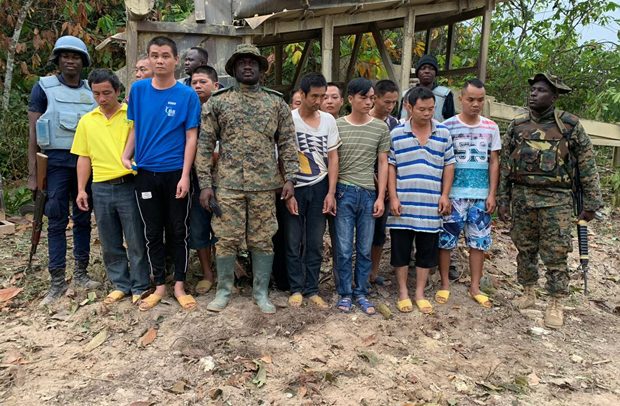 I was shocked to the bone when I recently chanced on a multitude of stubbornly impenitent Chinese illegal miners in the Amansie South District in the Ashanti Region gleefully stealing our mineral resources and destroying the environment in the process.

I am afraid the wanton depletion of our mineral resources which has culminated in the destruction of our lands and water bodies by the recalcitrant illegal miners is revoltingly outrageous, so to speak.

Notwithstanding the apparent dangers, the men and women who are in charge of affairs are wholly oblivious to the seriousness of the situation, hence their blatant refusal to halt the activities of the obstreperous illegal Chinese miners.

You may take my word for it, dearest reader, I am not suggesting for a moment that foreigners are not welcome in Ghana, far from it.

Suffice it to stress that a large number of genuine foreign migrants are plying their trades on our streets.

However, foreigners are not allowed to engage in small-scale mining operations, and Chinese immigrants are not exempted from such laws.

It is absolutely true that Ghanaians are known for showing exceptional cordiality towards visitors. Ghana has thus signed and ratified the International Convention on the Protection of the Rights of Migrant Workers and their Family Members.

Ghana duly ratified the International Convention on the Protection of the Rights of All Migrants Workers and Members of Their Families (the UN Migrant Workers Convention) on September 8, 2000 (See: http://www.migrantsrights.org/Ratificationchart.htm ).

That being said, it is worth emphasising that Ghana is not obliged to protect stubbornly unrepentant illegal miners per the provisions of the International Convention on the Rights of all Migrants Workers and their Family Members.

More importantly, the International Convention on the protection of the rights of all migrants, workers and members of their families is one of the numerous core international human rights treaties.

So by ratifying the treaty, Ghana has demonstrated its willingness and commitment towards the protection of the migrant workers and their family members.

Likewise, migrant workers have a duty to obey the laws of the land. Nevertheless, it is on record that some Chinese and other foreign immigrants are illegally mining our natural resources and destroying the environment in the process.

Let us face it, the influx of genuine tourists is vital for our blossoming economy. Nevertheless, we should not be timorously opening our arms widely to welcoming individuals who harbour ulterior motives. Indeed, Ghana cannot afford to entertain any remorseless nation wreckers.

Regrettably, in spite of the fact that small-scale mining operation is reserved for only Ghanaians, the sector in the recent past has been infiltrated by foreign illegal miners.

“Every mineral in its natural state in, under or upon land in Ghana, rivers, streams, water-courses throughout the country, the exclusive economic zone and an area covered by the territorial sea or continental shelf is the property of the Republic and is vested in the President in trust for the people of Ghana” (Minerals Act 2006).

In practice, therefore, any person who without a licence granted by the regulatory bodies and chooses to undertake any small-scale gold mining operation contrary to (subsection 1) of section 1 of small-scale mining law; or acts in contravention of any other provision of small-scale mining law in respect of which an offence has not been prescribed, shall be guilty of an offence and shall on conviction be liable to a fine, or to imprisonment for a term not exceeding two years or to both.

More importantly, where a foreigner is convicted of an offence under this law, he, shall after paying the fine or serving any imprisonment imposed on him, be liable to deportation under section 13 of the Aliens Act, 1963 (Act 160).

But despite the rational regulatory measures that have been put in place, some greedy and unpatriotic Ghanaians have been conniving with the foreign illegal miners to steal our natural resources while the sector regulators looked unconcerned.

It is an open secret that some Ghanaians would often secure plots of land and partner with the foreign illegal miners who have funds to bring in the bulldozers and other big equipment.

Suffice it to stress that although the small-scale mining laws prohibit the use of large explosives, the foreign illegal miners are revoltingly using unstructured methods, and at the same time supplying large explosive, rock crushers and other machines to local miners. How pathetic?

The involvement of the obdurate foreign illegal miners has changed the dynamics of small-scale mining.

The illegal miners use bulldozers, pay loaders and extremely heavy machinery. The foreign illegal miners have mechanised artisanal mining, and as a result the level of environmental devastation has been really huge.

Given the bizarre circumstances, I predicted some time ago that it would take massive leadership in order to curb the menace of illegal mining.

It was thus refreshing when the forward-thinking, serious and committed President Akufo-Addo prudently placed an interim ban on small-scale mining activities.

That was, indeed, the quintessence of massive leadership. Akufo-Addo, so to speak, did what Napoleon could not do.

Despite the small-scale miners endless protestations over the temporary ban on their poorly regulated activities, it was, indeed, a pragmatic step to put better data and policies in place to get the sector back on track, given the level of environmental degradation amid polluted river bodies.

Dearest reader, let me crave your indulgence just a moment longer to pose: which independent country on this planet (Earth) would its politicians, regulators and law enforcement bodies sit idly while some stubbornly impenitent foreign illegal immigrants despoil its natural resources and denude the environment?

Given the extreme dangers associated with illegal mining, it was, in fact, a step in the right direction for President Akufo-Addo to halt the illegal miners, many of whom were using noxious mercury and cyanide in their mining activities.

Take, for example, the World Health Organisation (WHO) asserts that exposure to mercury – even small amounts – may cause serious health problems and it is a threat to the development of the child in utero and early in life (WHO 2017).

There is no gainsaying the fact that mephitic mercury used in artisanal and small-scale gold mining is extremely harmful and its health effects on society are significantly worrying (WHO, 2017).

It is estimated that about 15% of the world’s gold is produced by artisanal and small-scale miners, many of whom use mercury and other toxic substances to extract the minerals from rivers and underneath the ground (BBC, 2013).