Strippers Pray To God In Tongues For Men’s Favour 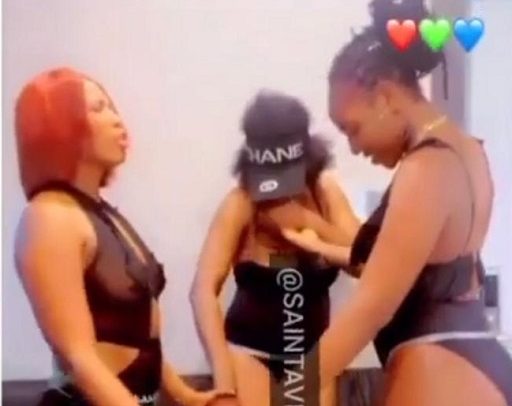 A video of three light-skinned and curvy nightclub strippers praying to God in tongues before they start their nightwork is generating a lot of attention online.

The ladies believed to be Nigerians could be seen begging God in their prayers to soften the hearts of men who will be coming to the club to spend their hard-earned monies and salaries on them.

All of them were dressed in black bikinis ready to strip. Their prayer leader also asked God for the forgiveness of their sins. At the end of the prayers, they jumped, screamed and twerked to the glory of God, hoping their prayers will be answered.

It is not clear where the incident occurred, whether in Ghana, Nigeria or perhaps Dubai.

However, currently, it appears stripping is on the rise in Ghanaian clubs despite years ago some clubs got closed down for the same reason.

In April 2007 Ghana Tourist Board closed down Amigo Night Club at Achimota.

A release by the Tourist Board at the time said Amigo Night Club had since 2005 failed to comply fully with registration and license requirements as stipulated by Legislative Instrument (LI) 1205.

The release at the time, signed by the Public Relations Officer of the Ghana Tourist Board, Ben Ohene-Ayeh, further stated that in addition to the illegal operations, Amigo Night Club also organised strip/nude dancing despite earlier warnings issued to the management to desist from such practices, suggesting stripping was part of the reasons the club was closed down.