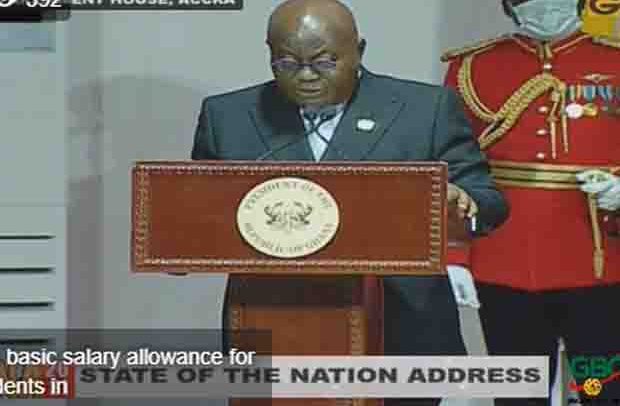 President Nana Akufo-Addo has spoken out on the Supreme Court’s Ruling that affirmed his second term victory.

On Thursday, March 4, 2021, the seven-Member panel of the Supreme Court affirmed the election of Mr Akufo-Addo.

Delivering the first State of the Nation Address (SONA) for his second term of Office on Tuesday, March 9, 2021, Mr Akufo-Addo praised the Court’s Ruling.

According to him, his second term victory was affirmed by the Court “in a well reasoned” and “excellent” ruling.

He stated that his victory in the December 7, 2020 presidential elections was “unanimously” upheld by the Apex Court.

It would be recalled that the Supreme Court, the highest court of jurisdiction in Ghana, ruled on Thursday, March 4, 2021, that indeed, Mr. Akufo-Addo won the December 7, 2020 Presidential Election.

The Court further ruled that results declared on December 9, 2020 despite the initial inadvertent error reflected the will of the people of Ghana and therefore could not be overturned simply on the basis of the error made by the Electoral Commission (EC) during the declaration.

In its live televised ruling, the Supreme Court dismissed the Petitioner, 2020 Presidential candidate of the National Democratic Congress (NDC), John Dramani Mahama’s ” as without merit.”

Chief Justice, Justice Kwasi Anim Yeboah, who presided over the seven-member panel of justices, pronouncing the Court’s verdict in packed court, said petitioner failed to demonstrate that the errors made by the first respondent, the EC, changed the results of the elections.

The Court in a unanimous decision, further held that, Mr Mahama cannot demand it (Court) to rely on the error of using total votes cast instead of total valid votes as a basis for calling for run-off election between him and President Nana Akufo-Addo.

It was the ruling of the Supreme Court that it was established during the trial that the total valid votes of the election is 13,121,111.

Furthermore, it was the ruling of the Supreme Court that Mr. Mahama failed to substantiate his allegation of vote padding in favor of Mr Akufo-Addo.

According to the Apex Court of Ghana, although vote padding is a serious issue, the alleged figures of 4,693 did not affect the outcome of the election.

As a result, the Supreme Court ruled that it did not see the need to order a rerun as the petitioner, Mr. Mahama pleaded.

[Livestream] State of The Nation Address 2021