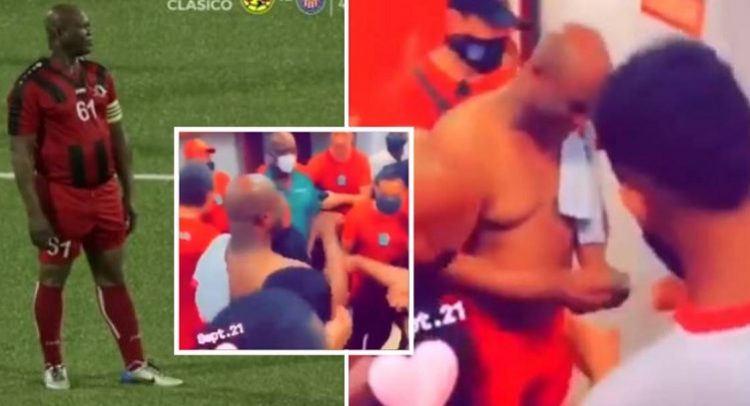 The video captured a shirtless Brunswijk handing out notes to Olimpia players and staff in the visitors changing room after his team’s 6-0 home loss in the first leg of the round of 16.

Brunswijk was gifted with an Olimpia jersey as he left the changing room.

“We are extremely worried by the content of a video that is circulating on social media and that raises potential integrity issues surrounding the CONCACAF League match between Inter Moengotapoe and CD Olimpia,” a statement said.

“The case is being referred to the CONCACAF Disciplinary Committee, which will initiate a formal investigation. A new update will be provided when that process is complete.”

Brunswijk made headlines when he was in the starting lineup at the Franklin Essed Stadion in Paramaribo.

In doing so, Brunswijk became the oldest player, at 60, to play in an international club competition.

He played for 54 minutes and started in attack alongside his son Damian Brunswijk, who played for 29 minutes before being replaced. Honduran media criticised Inter’s decision to play Ronnie Brunswijk and considered it disrespectful.

The return leg will be played on Tuesday in San Pedro Sula.