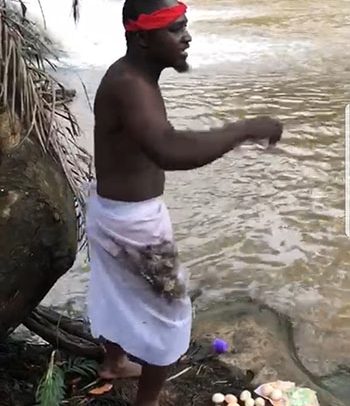 SUSPENDED NEW Patriotic Party (NPP) Chairman for Bontodiase Electoral Area at Agogo, Awudu Kassim, has caused a stir by cursing his own party executives with eggs and schnapps at a riverside.

In a recorded video, the NPP member in the Asante Akim North Constituency was seen wearing white cloth to the waist level, with a bare chest and a red band on his head, standing near a stream.

Awudu Kassim, who looked angry, was holding an egg in his right hand and there were a lot of eggs and schnapps in front of him as he rained curses on NPP executives in the constituency.

He prayed to the river deity to deal ruthlessly with any NPP constituency executive member in the area that had secretly met with delegates before the official opening for nomination for the Member of Parliament (MP) polls.

According to him, the party had suspended him on accusations that he  had secretly been meeting with some delegates ahead of the official opening of nominations for the MP elections.

He, however, did not deny the charge that allegedly led to his suspension from the party in the recorded video.

The aggrieved NPP polling station chairman only urged the river deity not to spare any NPP executive in the area, who had also committed the same crime “and they have turned to suspend me alone.”

In the short video, which had gone viral so far, he said “I’m serious Nana; please don’t fail to deal with them,” adding that he would not have respect for the river deity if it failed to deal with the people he was cursing.

Meanwhile, DAILY GUIDE has sighted the suspension letter of Awudu Kassim by the Asante Akim North Constituency of the NPP. The letter was dated 22nd July 2019 and headlined: “Notification of Suspension”.

Part of the letter said: “I’m by this communiqué notifying you of a suspension action against you, Mr Awudu Kassim, Electoral Area Chairman-Bontodiase-Agogo, as a consequence of a decision arrived by the constituency executives committee to hand you over to the disciplinary committee.

“This is in relation to matters brought forth for its deliberation with respect to engaging delegates within the constituency under rather bizarre circumstances without prior knowledge and approval of the executives”.

It also said: “However, pursuant to Article 3(7) of the party’s constitution, a member may be suspended from membership of the party, or holding any office in the party, pending enquiry into his/her conduct by the disciplinary committee.”

Signed by Aboagye Boateng Williams, the NPP Constituency Secretary, the letter further stated: “Your action was in total contravention and defies the basic requirements and conduct of a true patriot.

“Therefore, by this notice, you are hereby suspended with immediate effect until further notice.”