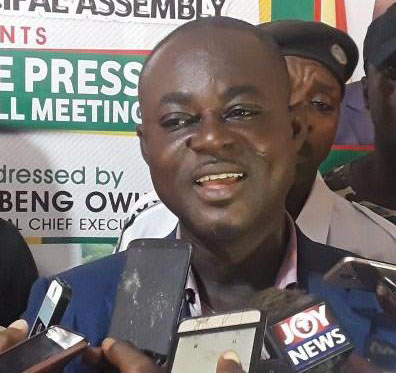 The Tafohene, Nana Agyen Frimpong II, has parried schemes to downplay the performance of the former Municipal Chief Executive (MCE) of Tafo, Fred Obeng Owusu, and therefore deny him the chance to be reappointed by the President.

According to him, the MCE has performed well and as he put it “brought massive development to the area so nobody can oust him.”

According to him, the MCE has been groomed and gained the necessary expertise to continue to deliver to take Tafo to the next level, therefore the unnecessary attacks on him should stop.

“This is a performing MCE, who has done marvellously well to transform Tafo within a short time, therefore we should give him the necessary support to sustain his splendid works,” he said.

Addressing the media at his palace in Tafo, Nana Frimpong warned that the Tafo traditional leaders would not allow anybody to peddle falsehood to distract the MCE from delivering when he is reappointed.

Some faceless people are reported to be spreading falsehood that the Tafo MCE has done nothing to transform the area ever since he took his office so the President should sack him.

The Tafohene, however, stated that there was no iota of truth in the wild allegations being made against Mr. Owusu, whom he described as respectful, hard working and a visionary leader.

According to him, Tafo has been transformed into a modern municipality within a short span, because of the proper and unique leadership skills being exhibited by Mr. Owusu.

Nana Frimpong II stated that through the hard work of their MCE most of the bad road networks in Tafo, which had remained not motorable for many years, had now been constructed.

According to him, the MCE has clearly displayed that he is a development-oriented leader as he has also started the Secondary City Projects programme in the municipality.

“He has laid a concrete foundation and very soon we shall all see the fruits of his labour as Tafo will further witness massive transformation, so the MCE must be retained in office at all cost,” he added.

Nana Frimpong II said chiefs were not allowed to indulge in partisan politics, but he would not sit aloof for anybody to work to get their hard working MCE who is transforming the area to be sacked.

The Tafohene said he would fish out the faceless people behind the schemes.

On his part, the Nkosuohene of Tafo, Nana Yaw Agyeman Sekyere, stated that the former Tafo MCE aside being respectful to the traditional leaders, had also worked tirelessly to transform the area.