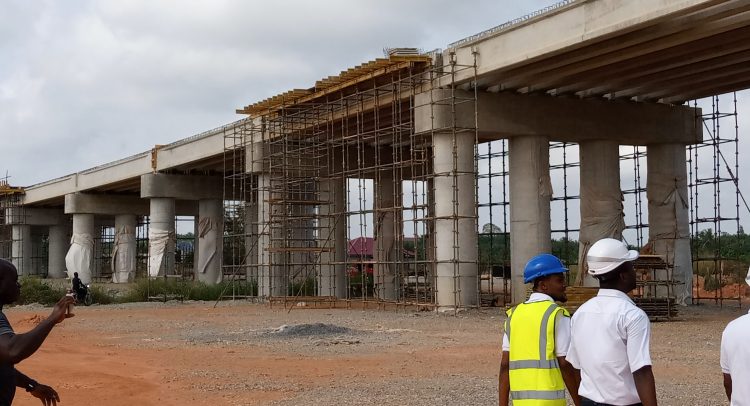 The viaduct being constructed

The construction of a new standard gauge railway line from Kojokrom to Manso to replace the narrow gauge line on the Takoradi-Tarkwa stretch being funded by the Government of Ghana is progressing steadily.

Upon completion, the new line would ensure high-speed and minimal or no interruption in the passenger train service on the Takoradi-Tarkwa rail line.

It would be recalled that the passenger service on the Takoradi-Tarkwa line had to be suspended for two weeks by the Ghana Railway Company after about three weeks of free passenger service, to allow the engineers work to improve the line.

As part of the initiative, the contractor, Amandi Holdings, is building eight 25 tons culverts from kilometre 16 to kilometre 20 on the existing narrow gauge line.

The Minister for Railway Development, Joe Ghartey, inspecting the ongoing works at Eshiem and Angu in the Western Region, expressed satisfaction with the progress on the line.

He said that the line had to be diverted from the Eshiem community because of the high-speed trains that would be plying the new standard gauge lines.

He also said the high-speed lines did not require too many curves, so it was appropriate the new line was diverted so that the curvy nature of the old line through Eshiem could be avoided.

“The engineers and consultants are looking at how they can stay within the right of way without compromising the speed,” he stated, adding that the consultant for the project had sent a proposal to the Railway Development Authority to extend the reopening of Takoradi-Tarkwa lines to enable them to build a world-class rail sector.

“The people are eager to see the train service to begin but the advice from the engineers is that we must extend the reopening date,” he added.

The Deputy Resident Engineer for Team Engineering, the Consultant, Peter Forkah, said they had sent a proposal to the authorities to use the shutdown period to continue with the construction of more culverts – where necessary – on the Kojokrom to Tarkwa stretch.

He said once the proposal was accepted, the reopening date of the passenger train from Takoradi to Tarkwa would have to be extended for about six weeks.

Earlier, the minister and his entourage inspected the construction of a 385-metre viaduct (Train Bridge), believed to be the longest in West Africa, over the road linking Eshiem to Kojokrom.

This viaduct which diverts the line from the Eshiem community is about 90 per cent complete.

According to the General Manager of Amandi Holdings, David Ben Ayun, the viaduct and other attached works were costing the country about $90 million.