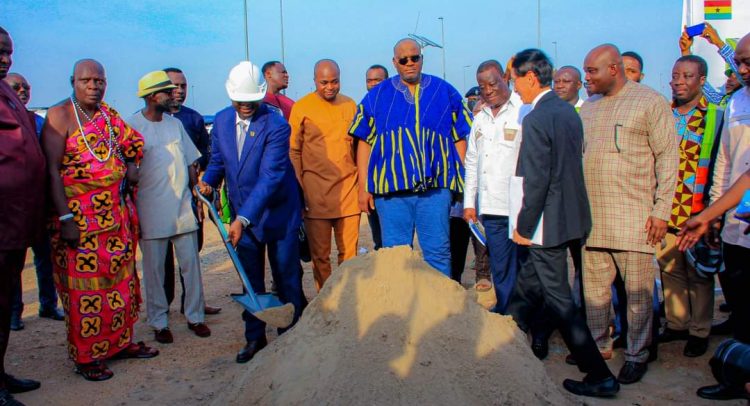 Vice President Dr. Mahamudu Bawumia has carried out ground breaking for the commencement of work on the phase two of the Tema Motorway Interchange project.

The three-tier flyover estimated at Yen 3.359 billion is to link Ashaiman on the Akosombo road to the Tema Harbour with a composite bridge structure on the N2.

This will bring completion of three-tier interchange at the Tema Motorway Roundabout.

The works that will be undertaken by Messrs JFE Engineering Corporation, a Japanese construction firm involve the construction of a composite bridge and ramps and axillary road works of a total length of 1.75km between the Harbour–Ashaiman Road.

Other works include the construction of drainage and safety facilities such as crash barriers and road signs and the installation of streetlights and will be undertaken within 30 months.

Speaking after cutting the sod on Monday December 5, 2022, the Vice President thanked the Japanese government who through JICA made provision for grant for the entire project.

He expressed excitement that this project will bring to 12 the number of interchanges being constructed by Nana Addo Dankwa Akufo-Addo government which has either being completed or ongoing.

Mentioning some of the completed interchanges, Dr. Bawumia stated that Tema interchange phase one, Pokuase Interchange (the only four-tier interchange in Ghana), Tamale interchange.

He expressed optimism that the project will ease traffic flow around the Tema Motorway Interchange.

On the part of upcoming road projects, Dr. Bawumia revealed that the Tema Motorway will be redeveloped into a 10 lanes facility as part of measures of improving road network in Tema and Accra.

Also, on some road projects ongoing, he pointed out the dualisation of the Ashalley Botwe School Junction to Nungua Farms, Tema Beach road, the road linking to the proposed stadium for the all African Games.

He stated that over 940 kilometres asphatic overlay have been constructed since the government assumed power in 2017.

Dr. Bawumia seized the opportunity to commend the sector minister for his leadership as well as congratulating the Directors and staff of the ministry for their contributions.

He urged the minister to ensure that adequate traffic management measures are put in place to ease inconveniences that the works will bring to the travelling public.

On his part, the Minister of Raod and Highway, Kwasi Amoako Atta assured Ghanaians that his outfit will ensure that the project is executed to the specification and standards to ensure that value for money is achieved and masterpiece project is delivered which will last for long period of time.

He appealed to commuters and motorists to bear with the contractor during the construction period.