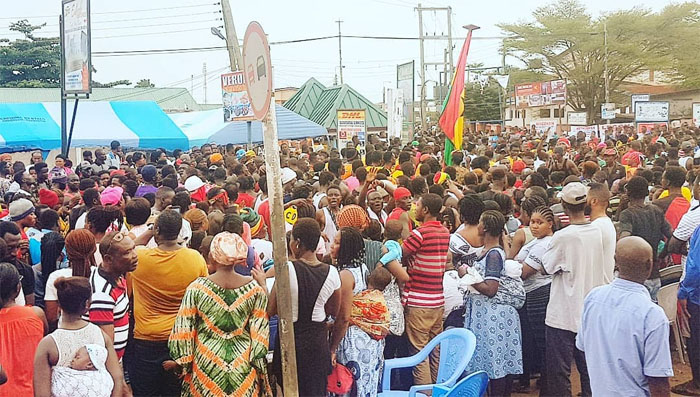 A section of the crowd at the Homowo procession on Saturday

Residents of Teshie climaxed the 2018 edition of its annual Homowo Festival over the weekend amidst merry-making.

Different youth groups in the area, including men, women, children and kinsmen, took to the principal streets on Saturday to join a mammoth procession, singing festival songs and chanting.

Some waved different flags while several others- both locals and foreigners- observed the procession in excitement from the sides.

Some of the celebrants were dressed in different costumes to convey different messages of peace, love and unity.

Later in the evening, there were different carnivals on the principal streets, which lasted over night.

Homowo is one of the biggest festivals in Ghana.  Several foreigners travel far and near to Ghana to witness the festival, which is held between August and September.

It is a harvest festival celebrated by the people of the Ga Traditional Area in the Greater Accra Region. It originated from a period of great famine which was eventually followed by a bumper harvest in grain and fish.

The word ‘homowo’ literally means ‘hooting at hunger’ and the main highlight of this month-long festival is the special dish prepared from corn, steamed and mixed with palm oil and is eaten with palm nut soup.

Prayers for a peaceful and prosperous year are offered. Each Ga chief is followed by a retinue with drumming, dancing and singing through his area where he sprinkles some of the special dish called ‘kpokpoi’ and offers libation. It is merry-making for Gas, and visitors in particular are invited home to join in the feasting.