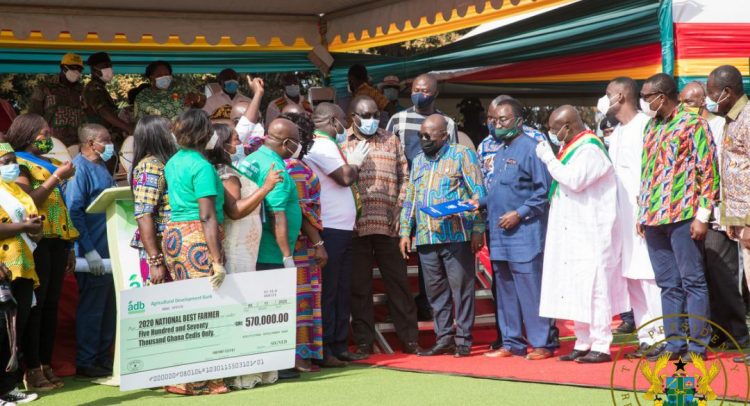 He explained that the Government was investing hugely in tree crops and very soon the nation would generate two billion dollars each from the export of cashew, coffee, shea-nuts, mango, coconut, rubber and oil palm annually.

President Akufo-Addo said this when he addressed the 36th National Farmers Day at Techiman in the Bono East Region.

It was on the theme: “Ensuring Agribusiness Development under COVID-19: Opportunities and Challenges”.

It was held at the Techiman Methodist Park and attended by Ministers of State, Members of Parliament, agro processing companies, farmers as well as local and foreign investors.

President Akufo-Addo noted that the performance of the agriculture sector was extremely poor and below the African Union target for member states since he assumed office in 2017.

That decision, the President said, gave birth to the Planting for Food and Jobs (PFJ), which had since 2018, invested hugely in seeds and fertilizer subsidies for farmers.

President Akufo-Addo said the successful implementation of the PFJ had made the nation a net exporter of food, with 50 per cent of local rice production meeting domestic demand.

He said the nation had finalised concessional agreement with India and Czech Republic for the importation of tractors and agro processing machines and inputs to be sold to famers at subsidised prices.

Government would also invest in the greenhouse sector, which had the potential of boosting the nation’s foreign income earnings in coming years.

The amount was invested in fertilizer and seeds subsidies for the more than 1.5 million beneficiary farmers on the programme, he said.

Dr Akoto said no government had invested hugely in the agriculture sector than the Akufo-Addo-led government, hence the need for farmers to vote to retain the New Patriotic Party in power in Election 2020.

Minister of Fisheries and Aquaculture, Elizabeth Afoley Quaye, acknowledged the commitment of the Government to transforming the sector and assured of the Ministry’s continuation to collaborate with partners to make agriculture contribute significantly to national growth.

A 55-year-old farmer from the Jomoro District of the Western Region, Solomon Kwadwo Kusi, was adjudged the 2020 National Best Farmer and he received a prize money of GHC570,000.

Nana Kofi Drobo IV, a farmer at Wenchi, and Mahamudu Mohammed Awal, a farmer from the Northern Region, were the first and second runners up, respectively.

Nana Drobo received a tractor and some farm inputs while Mr Awal had a Nissan Pickup vehicle in addition to farm inputs.
GNA