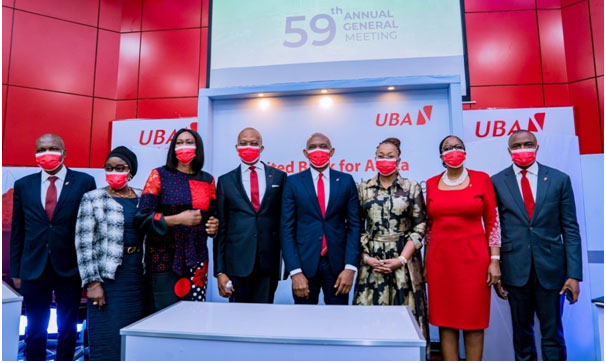 Tony Elumelu (4th right) and other officials of UBA

UNITED BANK FOR AFRICA (UBA) Plc has assured its teeming shareholders and investors of greater returns in the coming months.

UBA Group Chairman, Tony O. Elumelu, who recently gave this assurance to shareholders at the 59th Annual General Meeting, explained that the bank had made strategic decisions that would strengthen its resolve to earn the industry leadership that it had envisioned in Nigeria, Africa and globally.

Commenting on the performance of the bank, he noted, “Our African operations (ex-Nigeria) have contributed approximately 55% of our profits for the year, illustrating that we are truly a pan-African bank.”

The Group Chairman further explained that the bank remained committed to ensuring that its viability, amid an ever-changing business environment, was to continue to be a role model for African businesses, by showcasing the best of Africa to the world.

In its usual tradition of rewarding shareholders, the bank proposed a final dividend of N0.35 kobo, for every ordinary share of 50 kobo, bringing the total dividend for the year to N0.52 kobo, as the bank had paid an interim dividend of N0.17 kobo, earlier in the year.

Shareholders at the meeting commended the bank’s decision to plough back some of its profits into business consolidation, adding that, these times called for prudent and effective management of financial resources for all businesses, especially those with high shareholding rates, such as the UBA.

UBA’s Managing Director/Chief Executive Officer, Kennedy Uzoka, who responded to shareholders’ comments at the meeting, spoke on the reduced dividend pay-out this year, explaining that the bank had decided to be conservative, so as to further strengthen the business.