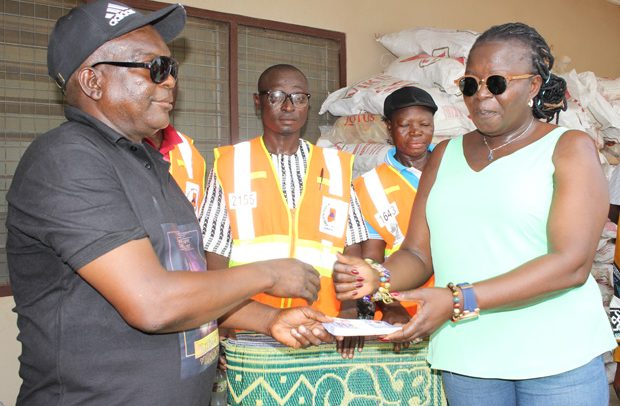 The minister donating the items

Upper East Regional Minister, Tangoba Abayage, has called on the various district and municipal assemblies in the region to search for improved ways of building long lasting cheaper houses for the less privileged in the region.

According to her, the annual situation where people’s buildings collapse due to any form of rainfall should be tackled ones and for all. She recommended a type of building which were recently donated to some households at the Kologo area, by the Swiss Red Cross, to the assemblies.

Abayage was speaking at Manyoro in the Kassena-Nankana West District in the Upper East Region, after making a personal donation to the National Disaster Management Organization (NADMO), to be given to persons displaced or affected in the recent rainstorm, leading to the demise of 19 people with property worth thousands of Ghana Cedis destroyed.

The items donated included bags of rice, buckets, mats, cloths, detergents among others.

A cash amount of GH¢2000 was added to the donation by the minister.

She commended the caretaker, Regional Minister, Salifu Saeed, for his exemplary leadership during the time of the disaster.

“He did what was expected of him as a regional minister. He handled the situation with the same speed and passion I would have, if I were in office. It is unfortunate that some people are trying hard to politicize this disaster too. They are doing everything possible to create an impression that the government and the leadership of the region don’t care about their plight. It is unfortunate and even that press conference they held to attack me, was uncalled for,” she said.

According to Ms. Abayage, the NDC took a picture she had with her son when she visited him in school and threw it out there to create the impression that “I was making merry while my people were suffering.”

She described their action as “unfortunate and petty” saying the accident happened in her absence and could not have jumped in to perform official duties even if she was in Ghana. This is because according to her, she was on leave and a minister had taken over her official duties.