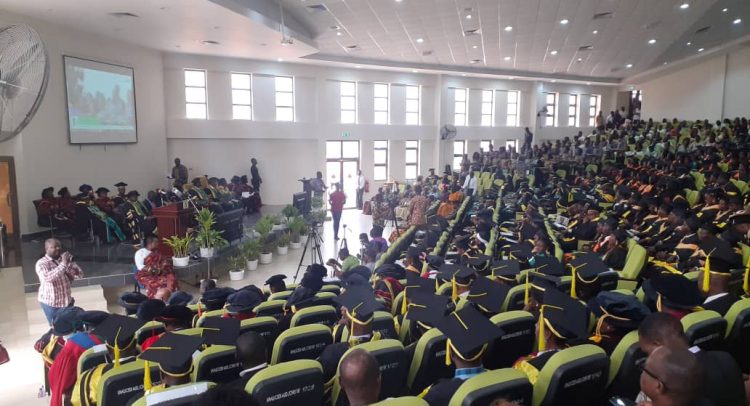 The University of Health and Allied Sciences (UHAS) in Ho has assured that it is ready to increase its admission by 40% to make-up for the spill over expected from the graduates of the Free Senior High School programme.

The Ministry of Education has stated that, with the first batch of the Free Senior High School completing this year (May/June), admissions into tertiary institutions are expected to increase by an additional 50,000.

To this end, heads of public tertiary institutions are being supported to increase intake to cater for the spill over.

According to the Vice Chancellor of UHAS, Prof. John Owusu Gyapong, in real terms, the university will increase its admission from 800 to about 1200 in September when admissions begins.

To make this possible, the university through its Internally Generated Funds is building 640 bed capacity hostel to also deal with accommodation challenges facing the school.

Apart from that, the university on the orders of the Central government has earmarked its Central Laboratory and Central Classroom block in Ho and Completion of permanent site of the School of Public Health at Fodome, near Hohoe as critical projects which when completed before September, could increase admissions beyond the estimated 1200.

Professor Gyapong gave the assurance at the main campus of the university (Sokode, near Ho) during the second session of the fourth graduation of the students for the 2018/2019 class.

Out of a total of 438 graduates, 36 were graduate students while 402 were undergraduates; mostly health workers who are upgrading themselves.

The Universitys Council Chairman, His Lordship Justice Jones Victor Mawulorm Dotse urged the graduating class to be worthy ambassadors to the university just as their predecessors have done; proving to be quality products that are globally competitive.

He appealed to government to ensure critical projects which are funded by GETFund (Central Laboratory, Classrooms, accommodation for senior members and Hohoe Campus) are completed as scheduled this year.

The Deputy Minister for Education, Prof Kwesi Yankah commended the university for its commendable initiatives, including developing its statutes, starting a basic school for its staff and expanding the staff strength from 642 to about 900 after governments financial clearance for 234 staff.

He announced that government has released its share of GHC6.2million counterpart funding for the $60million second phase of the UHAS development project.

The phase two which is expected to commence in March this year and completed between 24 to 36 months, comprises the construction of the School of Nursing and Midwifery and the Central Administration for UHAS.

The overall Best Student, Irene Dzrasah who is a mother of two and the Guest Speaker, Divine Kporha an aluminous of UHAS and recipient of the prestigious Princess Diana Award for 2019 urged the graduating class to never give up no matter the odds and always dare to make an impact in the society.