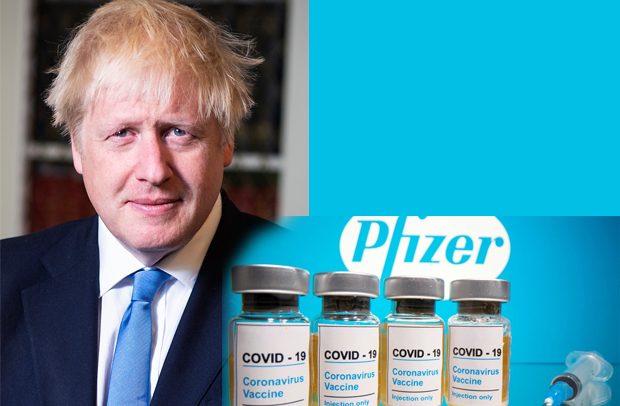 The United Kingdom (UK) has procured 40 million doses of the Pfizer-BioNTech Coronavirus vaccine.

Prime Minister, Boris Johnson, made this known on Wednesday, December 2, 2020, in a live televised addressed.

Delivering his televised monitored by DGN Online, the Prime Minister said UK was among the first few countries around the world to procure the vaccine.

The first people to get vaccinated are those at higher risk and those looking after them, people in care homes, and some health care workers, the Prime Minister announced.

The majority of the early vaccinations will be for over ages and care homes, with two doses for each person.

Those getting the first dose in December will not be totally free from the virus until the second dose in January 2021, according to the UK Government.

UK is to begin the roll out of the second doses from January to March 2021.

Next week, around 50 hospitals across England are expected to start distributing the vaccines to care-homes.

The Prime Minister said the coming of the vaccine does not mean UK was over with its fight against the virus.

He stated that other safety measures such social distancing, wearing of face masks have to remain in force.

His address came after UK earlier on Wednesday became the first country in the world to approve Pfizer-BioNTech’s coronavirus vaccine for public use.

According to the government, it will start rolling out the vaccine from next week.

“The Government has today accepted the recommendation from the independent Medicines and Healthcare products Regulatory Agency (MHRA) to approve Pfizer-BioNTech’s COVID-19 vaccine for use,” says the UK government in a statement.

“The vaccine will be made available across the UK from next week,” according to the statement.

He said “It is the protection of vaccines that will ultimately allow us to reclaim our lives and get the economy moving again.”

The UK has recorded over 1.6 million cases of the novel coronavirus, with over 59,000 deaths.

Pfizer and BioNTech have already sought an emergency approval of their coronavirus vaccine from the Food and Drugs Administration (FDA) in the US.

The two companies made the application on Friday, November 20, 2020, days after they announced that their vaccine has been found to be 90 percent effective against coronavirus.

In the event that the request is granted, the vaccine is to be distributed on a limited basis as President Donald Trump announced in a televised address days ago.

It is to be distributed in phases with frontline workers, the elderly and high-risk expected to first receive doses as indicated by the President.

Accordingly, other essential workers such as teachers and people in homeless shelters and prisons would likely be next, followed by children and young adults.

The approval process by the FDA, is due to take some weeks.

The vaccine is expected to first be reviewed by FDA advisory committee before a decision could be made.

By December this year as the President announced, the vaccine is expected to be distributed on the phase level.

Pfizer CEO Dr. Albert Bourla, noted in a statement on Friday that
“Filing in the U.S. represents a critical milestone in our journey to deliver a COVID-19 vaccine to the world and we now have a more complete picture of both the efficacy and safety profile of our vaccine, giving us confidence in its potential.”

The announcement came after Pfizer reported that its final data analysis found its vaccine to be 95% effective in preventing Covid.

That resulted in an estimated vaccine efficacy of 95%, according to them.

The application for approval makes the Pfizer and BioNTech the first companies to take steps to get their vaccine approved.

Moderna has also reported that it found its vaccine 95% effective against coronavirus.

On the other hand, Moderna’s vaccine vaccine must be stored at minus 4 degrees Fahrenheit.

President Trump in his recent address confirmed that the US government was spending some $1.95 billion to get the vaccine to Americans free of charge.

About 100 million doses are expected to be bought by the US as Pfizer announced on July 22, 2020.

The agreement permits the U.S. to acquire an additional 500 million vaccine doses.

President Trump said in his last address delivered from the Rose Garden of the White House on the Pfizer’s vaccine, that “our investment will make it possible for the vaccine to be distributed by Pfizer free of charge,” announcing at the time that his government will work with Pfizer “to secure an emergency use authorization which will be coming down extremely soon.”