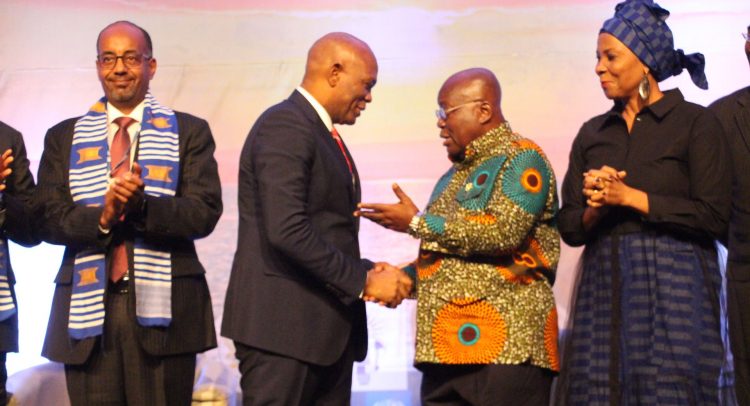 President Akufo-Addo in a handshake with Tony Elemulu (2nd L, Chairman, Tony Elemulu Foundation) while other dignitaries look on

The quest of President Nana Addo Dankwa Akufo-Addo to build a ‘Ghana Beyond Aid’ seems to have caught up the attention of the world, with the United Nations literally adopting the policy as part of its agenda for the development of the African continent.

This became evident yesterday when the United Nations Development Programme (UNDP) — an affiliate of the global body — hosted a high-level dialogue with African Influencers in Accra under the theme: “Africa’s Money for African Development: A Future Beyond Aid”.

The dialogue seeks to explore how Africa can optimize the use of its own resources, creativity and innovation to effectively finance Africa’s development.

It is set to examine the future of development in Africa and how to capitalize on the implementation of the Africa Continental Free Trade Agreement (AfCFTA), as well as the opportunities emerging from the Fourth Industrial Revolution.

It is also the first of its kind to feature an interaction between a select number of Africa’s political, traditional and business leaders, leading voices in culture, entertainment, media and the academia.

Addressing the forum, the UNDP Director Regional Bureau for Africa (RBA), Ahunna Eziakonwa, indicated that President Akufo-Addo had clearly shown commitment to the agenda to transform the African continent and make it self-reliant.

“I wish to thank President Akufo-Addo for sounding the clarion call assiduously and consistently working towards this goal,” she said.

On his part, President Akufo-Addo said he was passionate about building a “Ghana Beyond Aid” and “Africa Beyond Aid.”

“When I talk about Ghana or Africa Beyond Aid, I am simply insisting that we use our resources to build robust economies that will propel us into the likes of the developed nations of the world; I am insisting that we stop believing that our deliverance will come from benefactors. I am insisting that we take our fate in our own hands and work to bring us to where we do not look for or expect charity,” the President explained.

He said at the beginning of cocoa production season in 2021 in Ghana and Ivory Coast, farmers in the two countries would be paid a Living Income Differential (LIB) of US$400 as part of the effort to push out the aid agenda.

Besides, he said the two countries had agreed to sell cocoa with a living income premium of $400 a tonne added to the price in a bid to reform the way global cocoa is priced.