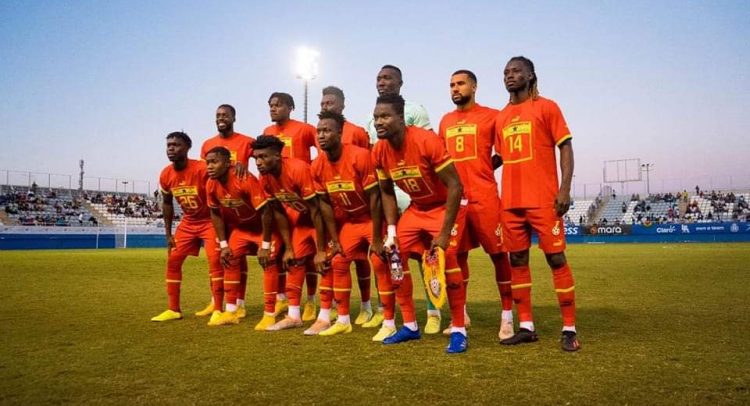 Ghana shrugged off last Friday’s defeat to Brazil to record a narrow victory over less fancied Nicaragua in a second friendly match on Tuesday evening.

The Black Stars despite a total dominance over the 139th ranked side, managed to put only one goal past them to claim a 1-0 win at the Estadio Francisco Artés Carrasco in Lorca, Spain.

Otto Addo made a couple changes to the team that suffered the 3-0 loss to Brazil in France last Friday with Southampton defender Mohammed Salisu and Athletic Bilbao forward Inaki Williams getting their first starts.

Skipper Andre Ayew and his brother Jordan Ayew were also made to the start the game from the bench.

Richard Ofori was preferred in goalposts posts to Joseph Wollacott for the first time in a long time.

Germany-born forward Ransford-Yeboah Königsdörffer was brought in the second half to mark his debut after replacing the goalscorer Issahaku.

The Black Stars thoroughly dominated the entire first half of the match as the Nicaraguans failed to register an attempt on goal which made Ofori had a free day.

Red Star Belgrade star Bukari came through with Ghana’s first attempt around the 18th minute after being through beautifully by Gideon Mensah but his effort was saved by goalkeeper Douglas Forvis.

Moments later Mohammed Kudus had an opportunity to put Ghana ahead but his effort after dribbling past about four defenders went wide.

Black Stars finally got the breakthrough in the 35th minute through youngster Abdul Fatawu Issahaku who scored his very first senior goal.

Issahaku’s powerful curled shot from inside the box took a slight deflection to beat Forvis in goal for the Central Americans.

Kudus found the back of the net nine minutes after restart but it didn’t count as it was ruled for offside.

Williams came close to getting his first goal in Ghana shirt in the 71st minute after receiving a nice cross from Mensah which he failed to connect.

Kudus had only the goalkeeper to beat to double the advantage for the Black Stars few minutes but he failed to get the ball at the back of the net as Forvis made another save.

Ghana came close again in the 89th minute with substitute Antoine Semenyo’s shot shot from close range forced another save from Forvis.

Ghana play Switzerland in a last preparatory game in November, a week before their first match at the World Cup against Portugal.

Nobody Will Be Disenfranchise – EC Assures Voters