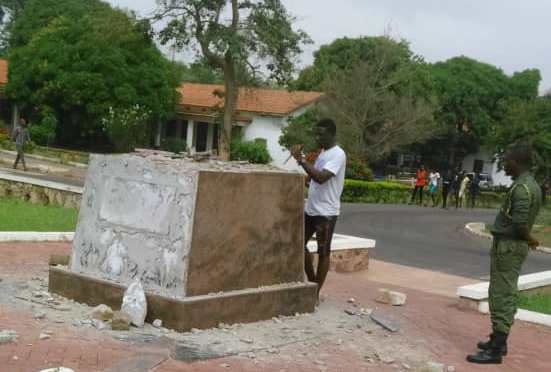 The University of Ghana has finally taken down the statue of India’s independence leader, Mahatma Ghandi, erected at the recreational quadrangle of the university.

Some students and lecturers of the University had called for the removal of the statue because of his “racist identity”.

An online petition was launched in 2016 and garnered over 2,000 signatures after some students had earlier defaced the statue in protest.

Earlier today, Wednesday, December 12, 2018, on the University of Ghana Campus, some men in the company of the university security, were seen demolishing the statue of the civil rights leader which was placed right behind the Balme Library.

“We received an order from above and we can’t tell you why it is being taken down’, a University of Ghana official is reported to have told Radio Univers.

The statue was ‘donated’ to the University of Ghana by the Indian President Prenab Mukherjee in 2016.

The hashtag #GhandiMustFall trended on social media in Ghana and in South Africa simultaneously, after the unveiling of the Statue by then Vice-Chancellor of the University, Professor Ernest Aryeetey and the Indian Prime Minister.

However, some Ghandi defenders argued that his actions and work for humanity should outweigh his words and some comments he made against blacks in the past.

On 5th October 2016, the Government of Ghana under President Mahama announced through the Foreign Affairs Ministry that the statue would be relocated.

Petition for removal of statue pays off

A former Director of the Institute of African Studies, Professor Akosua Adomako Ampofo, started the campaign for the removal of the statue.

Prof. Adomako Ampofo together with another academic at the Institute of African Studies at the University of Ghana, Dr. Obadéle Kambon, urged members of the University of Ghana Council to heed to the petition arguing among other things that, Gandhi was racist against black people and honoring him sets the wrong example for students.

At the time, Ghana’s former High Commissioner to India, Professor Mike Ocquaye, described as unnecessary demands for the demolition of the statue.

According to the professor of political science and lawyer, a decision to demolish the statue might have implications on diplomatic ties between Ghana and India.

“It will be most unnecessary, most uncalled for and not in the supreme interest of Ghanaians and we must know what serves our interest best. Some people in India wanted diplomatic relations to be broken in Ghana over the way we sometime back spited them, but caution prevailed and they kept their cool to show that they understand diplomacy and the ups and downs of international relations and today the relationship is a bit better and we look forward to it being better still” Prof. Ocquaye said at the time.

The man who’s now the Speaker of Ghana’s parliament, further called on those who petitioned for the removal of the statue to be tolerant of divergent views, saying that is the hallmark of academia.

The Chairman of the Kwabena Nketia Center for Africana Studies, Prof. Kofi Asare Opoku, also backed calls for the pulling down of the statue, saying institutions like the University of Ghana should honour African heroes instead of iconic figures from elsewhere.

“However great Gandhi is; he may be great for the Indians, but for us we have our own heroes, men and women in African history that we don’t know about them. So we need our own heroes because they are the ones who can inspire us.”

He explained that “if you take foreign heroes you would always think that greatness is reserved for foreigners; but we have our own great people here whom we must revere and honour to become a source of inspiration for our young people.”

On 14th June 2016, a statue of Mohandas Karamchand Gandhi was erected at the Sam Aboah quadrangle of the University of Ghana.