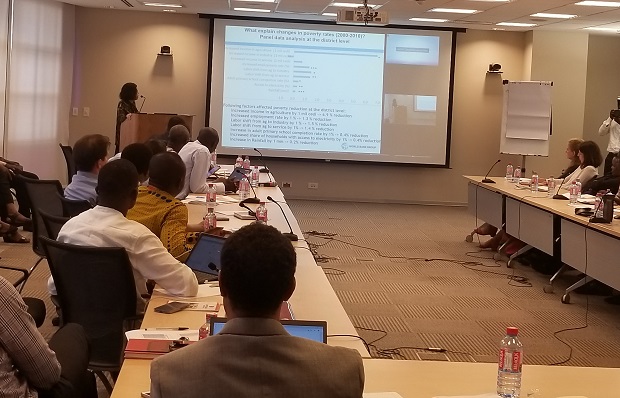 A section of participants during the workshop

Tomomi Tanaka, a senior economist with the World Bank, has called on government to invest in infrastructure development in the country to increase productivity and create more jobs.

Speaking at a day’s workshop on the Spatial Analysis of Poverty in Ghana’ at the World Bank Office in Accra, she said government must provide more access to electricity, improve roads to markets to help engender more economic activities to develop the country.

Ms Tanaka stated that poverty has become widespread because of climate change and inadequate schools and hospitals.

According to her, there was the need to have a better data set in collaboration with various government ministries, departments and agencies, as well as developing partners.

She added that better access to electricity could shift labour from the agriculture sector to industry.

Analysis of data from 2000-2010 at the district level showed that the agriculture sector increased income by GH¢1 million to reduce the poverty by 6.9%.

“As a result of drought, floods, soil erosion and many climate changes there were not enough opportunities in the manufacturing sector, hence the decrease in agricultural productivity and most inhabitants were unable to accumulate capital to delve into another sectors rendering most of such areas poor.

Ms Tanaka said that having an online platform could create an avenue for sharing data in the district and help the government provide sufficient funding to deprived districts to help the poor and vulnerable.

The workshop was used to show how geospatial information could contribute to the understanding of spatial distribution of poverty to improve access to services for the poor and vulnerable citizens in various districts.