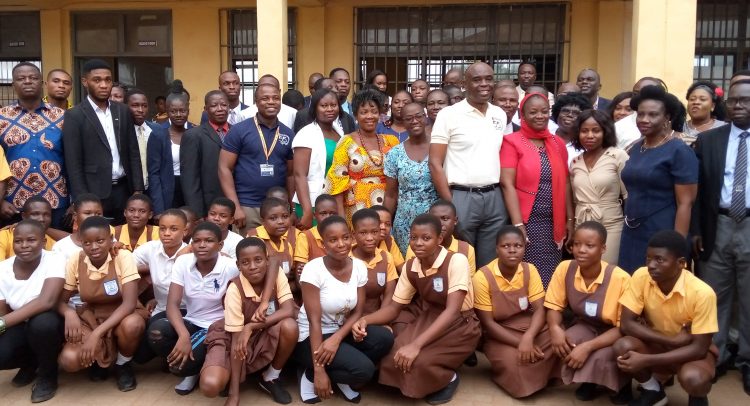 AS PART of its 55th anniversary celebration, the University of Professional Studies, Accra (UPSA) has adopted the La-Nkwantanang M/A Basic School in Accra under its community academic project.

At a brief ceremony held at the La-Nkwantanang Cluster of Schools at Madina in Accra on Monday, the Vice Chancellor of UPSA, Professor Abednego Feehi Okoe Amartey, officially launched the university’s community academic project where he officially announced the adoption of the La-Nkwantanang Basic School.

Prior to the announcement, the Headmistress of the school, Madam Paulina Kyerema, highlighted some of the challenges facing the school such as lack of an Information Communications Technology (ICT), laboratory, library and a canteen.

Besides, she revealed that constant breakage of the louvre blades by some pupils had posed a major challenge to both pupils and teachers as they are usually exposed to harsh weather condition. She added that lessons were halted on some occasions whenever it rained since the water entered the classrooms and sometimes led to floods.

She expressed hope that the initiative would go a long way to complement efforts to help solve the challenges the school is facing.

In his address, the Vice Chancellor of UPSA, Professor Amartey, assured the management and the pupils of the La-Nkwantanang Basic School that his outfit would offer support to the school through the provision of computers, a shed, where students can sit and eat, and books for the pupils to read, adding “we will see how best we can do to provide louvre blades and a library.”

Prof. Amartey disclosed that the university would organize a teacher motivation award with the aim of encouraging hard-working teachers.

The university, he added, was ready to help organize Saturday classes for pupils of the school. He gave an assurance that lecturers and students of UPSA were ready to volunteer to teach subjects like Mathematics, English Language, French and Social Studies.

The La-Nkwantanang M/A Basic School was established in 2005 with about 40 students comprising 23 boys and 17 girls, including seven teachers.