US Ambassador Rallies For Black Stars 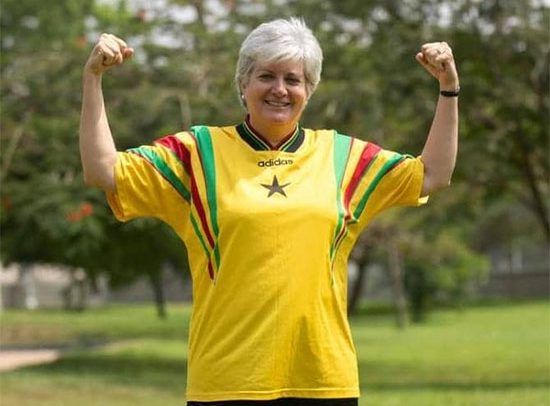 The United States of America Ambassador to Ghana, Stephanie Sullivan has thrown her support behind the Ghana Blacks Stars ahead of their participation in this year’s 2021 Africa Cup of Nations in Cameroon

Ambassador Stephanie Sullivan, who wore a round-neck yellow jersey of the Black Stars as she raises her two hands in the air in a post on the Embassy Facebook page said; Go Black Stars Go! We wish the team and the entire country the very best in the #AFCON2021. 🇬🇭🇬🇭🇬🇭🇬🇭🇬🇭.

The Embassy has since been rallying supports to the Ghana Black Stars.

The Black Stars will today take on their Moroccan counterparts (Atlas Lions) in their Group C fixture in Yaounde, Cameroon at the ongoing Afcon, which began on Sunday.

The biennial football bonanza kicked off yesterday after multiple postponements, with host Cameroon opening the month-long football festival with Burkina Faso. Ethiopia battled debutant Cape Verde to losing to the Island nation by 0-1.

In other games today, Senegal will face Zimbabwe, while Guinea battle Malawi. Comoros will take on Gabon in another Group C clash.

The tournament’s 52 matches will take place at six venues spread across the central African country. 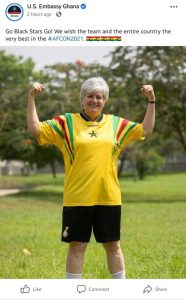