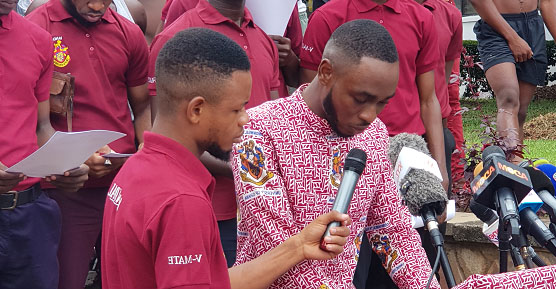 Junior Members of the Commonwealth Hall of the University of Ghana (UG), Legon, also known as Vandals, have asked government to respond to their concerns regarding accommodation challenges in the school or they will hit the streets.

Addressing a press conference at the premises of the hall yesterday, 8th October, Prince Lumor, JCR President, of the hall said even though government responded to a petition they sent to the Jubilee House concerning issues of accommodation on campus, they were expecting government to give further and concrete assurances to their concerns.

The JCR of Commonwealth, on 24th September, petitioned the Office of the President to intervene in the issue of accommodation deficit on the University campus. The president on 3rd October, through his executive secretary, Nana Asante Bediatuo, acknowledged receipt of the petition saying the contents of the petition have  been noted and government will get back to the students in due time.

However the students who are not happy with the response have given government a week ultimatum to get back to them or face their wrath.

The students further revealed that the University management in an attempt to solve the perennial accommodation deficit in the school is trying to implement a policy where only level 100 students shall be given accommodation.

Such policy, Mr. Lumor said cannot be a very good option and have urged the school management to discard such idea at its “embryonic stage”.