VIDEO: Soldier, 4 Others Arrested For Armed Robbery In Tamale 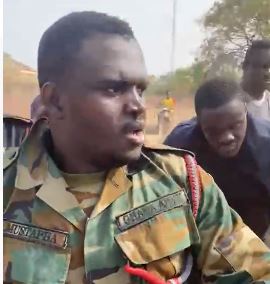 Five robbery gang led by a military man at the Burma Camp in Accra are in the firm grips of the Northern regional police in Tamale for alleged armed robbery.

Remaining suspects are Benjamin Agyei, 23, mobile money vendor from Accra and Seyram Addo, 29, a Plumber from Danfa near Madina in Accra.

The suspects were reportedly arrested by Buipe Highway Patrol Team for robbing a 2020 Toyata Camry vehicle and other properties from its owner at his residence and fled.

Per police sitrep sighted by DGN Online, the suspects on January 23, 2022 said police received information about the attack and robbery by the suspects who fled towards Buipe direction.

The Buipe Highway Patrol Team on duty at Sawaba Police checkpoint on Buipe – Tamale highway was alerted who intercepted and arrested the suspects in two vehicles with registration number AS8445-19 and GX6923-20 in connection with the crime and sent them to the Buipe Police Station.

Other items such as some Military uniforms, Police Ballistic helmet and police uniforms were also found in the Toyota Camry Spider with registration number GX6923-20.

Police has therefore retained the items whiles the suspects have been detained after the victim had identified one of the vehicles the suspects were using as his, taken from him at gunpoint and other items at his residence at Banvim-Jonshegu a suburb of Tamale.

Meanwhile, the Regional Police Headquarters, Tamale has taken over investigation and prosecution of the case.