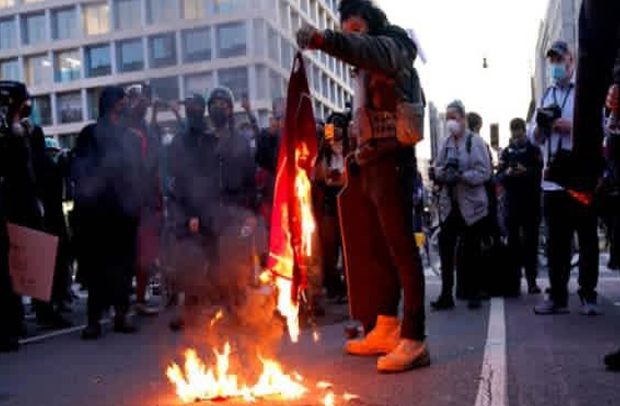 Seven guns have reportedly been confiscated by Washington DC police following violent protests in the City between President Donald Trump supporters and counter-protesters.

Reports say some 20 persons have been arrested in connection with the violence.

Pro-Trump supporters had been embarking on a peaceful protest on Saturday, November 14, 2020 before persons believed to be linked to Antifa and Black Lives Matter (BLM) allegedly waged attacks against them.

Hundreds of thousands of pro-Trump supporters were said to have attended the initially peaceful protests, demanding an end to electoral theft.

Reports across social media, suggest that some anti-Trump protesters allegedly attacked supporters of the US President, throwing eggs at them.

Reporters say the anti-Trump protesters allegedly stole signs, hats and banners belonging to the pro-Trump supporters who had been embarking on a peaceful protest in Washington DC on Saturday, November 14, 2020, over alleged election fraud.

The pro-Trump supporters had been demanding an end to electoral theft, chanting “stop the fraud” during their protest attended by hundreds of thousands of people.

However, the protest reportedly turned violent after anti-Trump protesters appeared onto the scene and allegedly waged attacks against the pro-Trump supporters.

Reports say out of the 20 arrests, about three involved assaults.

Again, reports say some two police officers were injured as they tried to bring the violence under control.

Among the anti-Trump protesters were persons believed to be connected to Antifa and the Black Lives Matter (BLM) Movement.

DC Police blocked off BLM again so Trump supporters couldn't get through and were made to go through BLM group which then attacked them. #MillionMAGAMarch pic.twitter.com/tS7YTEe51X

In videos circulating online, some of the protesters could be seen exchanging blows.

Mr Trump has accused the “silent media” of turning a blind eye to the clashes in Washington DC.

On his Official Twitter handle, Mr Trump retweeted a message from Republican Representative, Lee Zeldin of New York who claimed that there was a “total media blackout” as leftists waged “abhorrent” attacks on Trump’s supporters.

Radical Left ANTIFA SCUM was easily rebuffed today by the big D.C. MAGA Rally crowd, only to return at night, after 99% of the crowd had left, to assault elderly people and families. Police got there, but late. Mayor is not doing her job!

He went on to retweet a video showing a man being punched and kicked on a street in Washington DC.

Human Radical Left garbage did this. Being arrested now! https://t.co/fXSsXXp5yc

The President said activists of Antifa returned to the peaceful protest grounds under cover of darkness to cause trouble.

But Mr Trump and his supporters say the election was rigged and they are challenging the results legally.

Only Ghanaians Can Decide Who Leads Them - EC