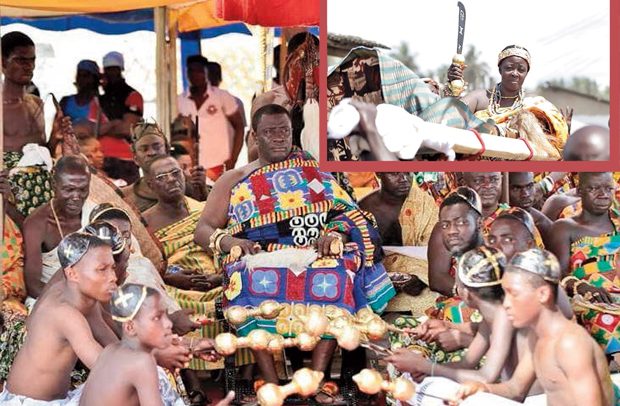 Scenes from the Kundum Festival

There is no doubt that community tourism has become an opportunity for tourists to spend amazing time according to their convenience while experiencing the best traditional life of natives.

They explore more, learn more cultures and enjoy the exuberant nature in these communities they visit.

This week, NEWS-ONE will be leading visitors to Axim, one of the major communities in Ghana with beautiful attractions.

This is part of an initiative by the office of the Ministry of Tourism Arts & Culture to guide tourists to the best destinations in Ghana.

A trip to Axim has always been an essential part of any holiday experience in Ghana.  It is one of the country’s largest tourism hubs often labelled with beautiful beaches and resorts, iconic landmarks, scenic spots, impressive skyline, among others. Axim always has something to captivate tourists and it offers numerous lodging opportunities as well.

The coastal town, which is also the capital of Nzemaland, is located in the Western Region of Ghana and lies a few kilometres west of the port city of Sekondi-Takoradi. It is also to the west of Cape 3 Points, which is Ghana’s farthest point to the south.

Below are the must-visit places in Axim. So don’t miss an opportunity to these places when in Axim.

Built in 1515, Fort San Antonio was the second fort constructed by the Portuguese on the Gold Coast after St George’s Castle in Elmina. The entrance fee includes a guided tour, and from the top of the fort, there are spectacular views of the stunning coastline in both directions. The fort is open to the public daily. In 1503, the Portuguese had built a trade post in Axim, near the edge of the River Ankobra, but they had to abandon it due to insistent attacks by the local people. They then constructed, in 1515, a massive triangular fort on a small promontory closer to the River Ankobra. Named Santo Antonio, it was the second Portuguese fort built on the Gold Coast after St. George’s Castle (Elmina Castle). To enhance its defence on the landward side, a three-metre deep rock-cut trench was constructed. Visit the fort to learn more about its history and how it survived the test of time with its legendary artifacts since 1515. The wave-lashed Boboewusi Island, also known as Bobo Yesi, lies tucked away in the distance off the coast, housing the lighthouse that thrusts proudly towards the sky out of the surrounding reefs. Tour Boboewusi Island and the lighthouse run by the Ghana Ports & Harbours Authority. When you climb to the top of the lighthouse, you will discover a fantastic view of the countryside, long stretches of sandy beach and the exuberance of Axim township. Afterwards, you may have a picnic on the island’s beautifully landscaped grounds. You will take an adventurous cruise in a dugout canoe with outboard motor, riding the waves to the exciting usland. Before settling for a picnic, make sure you take a walk on the rocky beach around the island. Every September, Axim hosts the Kundum Festival. It coincides with the fish season. Families return to their ‘family homes’. Deceased ancestors are remembered and mourned. Family problems are sorted out in peaceful ways, helped by the traditional elders if necessary. There is much dancing, drumming and feasting. Traditional leaders and honoured guests are ceremoniously carried in palanquins, shaped like their fishing canoes and decorated with flowers. It is celebrated by both the Ahantas and the Nzema people of the Western Region and has a lot of legend behind it. One school of thought has it that the Kundum Festival comes from a tree in a village called Aboade whose fruits ripen only once a year. Thus, the people adopted the ripening of the fruit to start the celebration. Another legend has it that a hunter from the village was on a hunting expedition and he saw dwarfs dancing to the rhythm of a strange music. He studied them for months, learnt the dance and came home to teach his people. Thus, the origin of the Kundum Festival and the Kundum dance. The way it is celebrated varies from town to town. Make sure to be part of Kundum for an exciting experience. Nini Suhien National Park is a smaller national park that is joined with the Ankasa Resources Reserve into a unified conservation area. The area combined is about 500 square kilometres, of which the national park comprises about 160 square kilometers. Despite its small size, the area has an incredibly rich biodiversity. You will see African elephants and the endangered Diana monkey, along with 263 species of bird. Sublime views of the Nini and Suhien rivers and waterfalls are available for enjoyment in the park. The park is located near the border of Ivory Coast. Lou Moon has been described as Ghana’s ultimate get-away for natural beauty and exclusive boutique comfort. It is located in the Axim area and is known for its safe private swimming beach, world-class cuisine and premium cocktails and wines. Moon Lodge is right on the beach. It offers a private beach area with a natural pool and an African-style décor. Rooms and suites feature air conditioning, a terrace and a private bathroom with a shower. Executive rooms and suites offer sea views. The on-site restaurant serves international dishes and seafood dishes. Massage treatments can be arranged and unlike the majority of Ghana’s beaches, the water here is clear, calm and perfect for swimming. And if you’re fed up with eating and sunbathing, there are tonnes of activities on offer, including kayaking, table tennis, volleyball and paddle boarding. The resort is equally popular with visitors from over the border in La Côte d’Ivoire. Lou is one of the many best lodges in the area. One of the best for comfort in the area, it is palm covered oasis, surrounded by beautiful beaches that has found the balance between the natural environment and the requirements of clientele using a traditional and close to nature design.

The hotel recognises the importance of sustainable tourism industry for Ghana and as such has adopted environmentally friendly practices such as solar hot water and the use of borehole water for facilities and where possible using recycled materials. And, of course, the traditionally designed buildings employ environmentally friendly construction practices. Pass by the Axim Hotel for a tourism and cultural experience. Situated in Axim, Ankobra Beach Resort offers a private beach area as well. Guests also enjoy sea views from the rooms and it has access to a fitness centre. The property boasts one of Ghana’s oldest shrines located within its grounds. Ankobra Beach Resort offers a children’s playground. The area is also popular for cycling, surfing and fishing. Its six kilometre long beach is surrounded by tropical flora and fauna in a lovingly designed and comfortable ambience. The entire 45-hectare complex, the 20 rooms, the social and sustainable engagement for the local population, the food, the service and the quality are here at the highest level of a family-run boutique hotel resort. Stop over at the Ankobra Beach for a beautiful beach experience. There are more tourism hubs in the Western Region and NEWS-ONE will unveil some more next week.