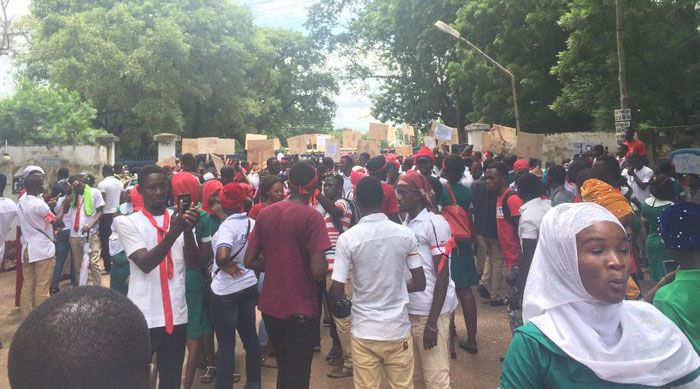 The nurses and midwives during the demonstration

Members of the Ghana Nurses and Midwives Trainees Association have embarked on a demonstration on the streets of Tamale to express their displeasure over government’s inability to issue their financial clearance and postings after successfully completing their course of study and a one- year intensive service to the nation.

Being ethically prepared, licensed and willing to work, some 26,864 trained nurses and midwives are yet to have their financial clearance forms issued by the Ministry of Finance to make room for their postings and employment.

According to them, no trained nurse or midwife has been employed by government.

National President of the Association, Batiah Semi-Ulah Santi, said the claim that some members of the association had been cleared and subsequently employed by government is “a fallacy which is not even funny, and to say it’s an insult to our intelligence will be an understatement.”

According to them, their unemployment situation is not only unfortunate but also a threat to national security. They are therefore calling on government to see to their clearance and employment without delay.

He further revealed that the Finance Ministry has, under the directives of the President, issued clearance for over 15,000 members of the association across the country and they would soon be employed permanently.

Meanwhile, the aggrieved nurses and midwives have given government a three-week ultimatum to clear them financially or face their wrath.