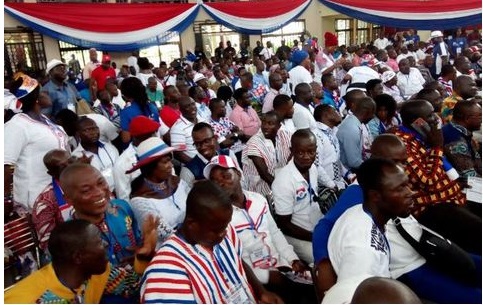 Some members of the NPP at the congress

The New Patriotic Party (NPP) in the Volta Region has cleared 43 aspirants to contest the party’s primaries to represent their constituencies (orphan ones) on the ticket of the party.

The NPP has set September 28, 2019, as date on which to hold elections in ‘orphan constituencies’ (Constituencies without NPP sitting MPs).

The 43 who will be contesting in all 18 constituencies in the region where not a single constituency is represented by an NPP MP, had five of them being females.

The second vice-chairman, Frederick Fredua Anto, who made this known in Ho, said four out of the lot have also been declared to contest unopposed by the vetting committee.

He noted that although the vetting committee had no capacity to disqualify any aspirant at this level, the aspirants have up to August 17, 2019 to be declared legitimate to contest, from the National Vetting Committee.

Considering the date slated for the primaries, all parties will have the opportunity to contest adverse findings.

Mr. Anto reminded the aspirants that per Article 12 of the Party’s Constitution, aspirants for such positions must be active members for at least two years in good standing, owe no allegiance to another country and have honoured their tax and other statutory obligations.

He observed that majority of the aspirants were Municipal and District Chief Executives who have for the past two and half years become the face of the party and government on the ground and a liaison between government and the people. They have done tremendously well to facilitate development for both residents and party members.

Mr. Anto however said that when the time for primaries in constituencies with Members of Parliament was ready, MMDCEs interested to contest such seats would have to resign their positions to be able to contest.

He was hopeful that the Party will be able to annex four parliamentary seats in the 18 constituencies of the Volta Region. More so, they are targeting a minimum of 40% of the votes in the region which is the stronghold of the opposition NDC.

According to him, the countless initiatives of government in improving the lives of the people were enough to win the hearts of the people.

Meanwhile, the NDC in the region has also cleared 60 aspirants to contest their primaries on August 24, 2019. They are optimistic of retaining all the 18 seats with majority of the votes in the region.

Other political parties are yet to outline their activities ahead of the 2020 elections.

‘The Devil Tempted Me’

Patapaa, Wendy Shay, Others Gear Up For 'Pa2pa' Concert