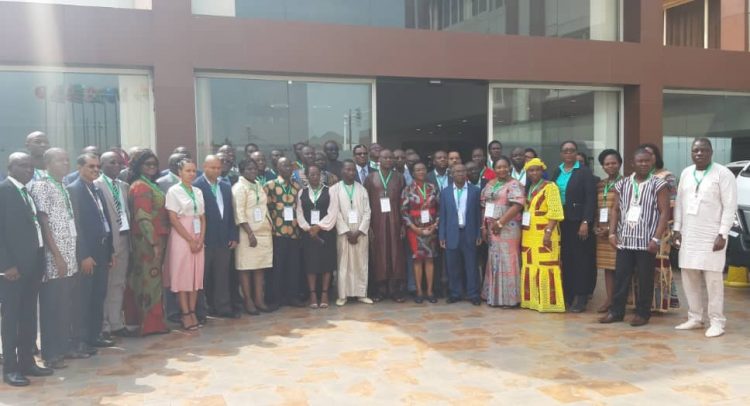 Participants in a group photo after the opening of the three-day workshop.

The West Africa Health Organization (WAHO) has begun a three day regional workshop for food, alcohol and tobacco regulatory agencies to deliberate on best practices in preventing and controlling Non-Communicable Diseases (NCDs) which is responsible for over 1.2 million deaths in the region.

Themed: “Towards Strengthening Regional Capacity in Regulation for Improved Nutrition and Health in West Africa”, the workshop is aimed at helping participants identify strategies which contribute to strengthening the capacity of national agencies to regulate food, alcoholic and non-alcoholic beverages with the aim of controlling NCDs in general.

It further stated that almost three quarters of all NCD deaths, and 82 percent of the 16 million people who died prematurely, or before reaching 70 years of age, occur in low and middle-income countries.

The figures notwithstanding, it is envisaged that ECOWAS can save 250,000 lives by 2025 if the WHO “Best Buys” is properly implemented.

‘Best Buys’ is a WHO document which provides policymakers with recommendations which relate to the regulation of food, alcoholic drinks, sugar-sweetened beverages, tobacco and alcohol, major risk factors for NCDs.
Dr. Owen Kaluwa, WHO country representative, speaking at the opening ceremony said ‘a review of the list of the various options across the risk factors clearly shows that most of the interventions with impact that are also cost effective require the work of regulatory agencies.’

He therefore observed that addressing NCDs should be an integral part of the collective efforts to achieve Sustainable Development Goal 3 on good health and wellbeing for all at all ages.

Minister of Health, Kweku Agyeman-Manu, in a speech read on his behalf, urged participants to come up with action plans in preventing NDCs can have serious health implications to varying extents based on the multiplicity of factors.

He said unhealthy diets, alcohol and tobacco are major risk factors for non-communicable diseases such as diabetes, hypertension, cancer etc. and therefore called for a concerted effort in addressing the issue which according to him was a negative fallout of the sub-region’s economic progress.

Director General of West African Health Organization (WAHO), Professor Stanley Okolo, in a speech read on his behalf said the workshop will focus on the important contribution of regulatory agencies in addressing non-communicable diseases which exert a heavy burden on health globally.