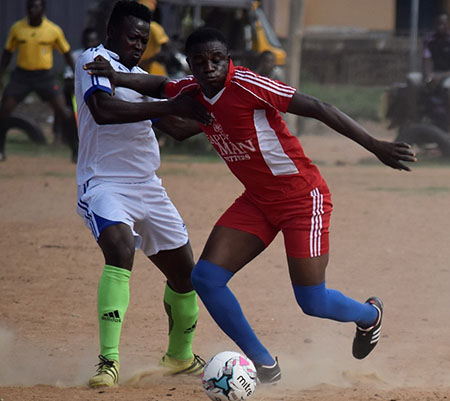 An action from one of the games

Mboma City and Mighty Warriors have distinguished themselves in this year’s Happy Man Bitters inter-community soccer competition (HAMISCO) and appear set for the final clash this Saturday at the COS Park, Navrongo in the Upper East Region.

HAMISOC, considered as the highest rewarding sports tournament in the Upper East Region, is expected to record high turnout.

The three-month long competition started with 12 teams from the two Kassena Nankana Districts divided into groups of two, playing in an away and home format.

Thirty-two games have been played so far, with Mission Warriors and Kajelo Holy Stars also set for the third and fourth positions.

“This year’s event is set to be graced by exciting football personalities who have never travelled to this part of the country to watch a game,” one of the organisers of the competition said.

HAMISOC is an annual soccer competition arranged by Fehna Entertainment and sponsored by Happy Man Bitters, produced by Charger Limited.

The competition started in 2016 when the CEO of Charger Limited, Dr. Bortey Borketey, conceptualised the idea of bringing communities together to exhibit talent in unity.

This year’s edition of the tournament marks the fourth anniversary, which has seen Paga Crocodile Stars winning the first edition, Pungu FC winning the second edition, with Saboro FC as the 2018 winners and current defending champions.