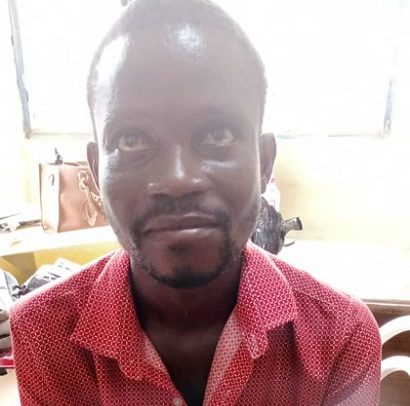 Kwabenya Police have apprehended a 35-year-old man who allegedly killed his 86-year-old mother and secretly buried her in her own home at Dome near the Dome Market in Accra.

The suspect, Benjamin Kofi Yeboah, aka Ben, is reported to have left the area after the dastardly act and was arrested last Friday.

Police identified the mother as Abraa Mansah, who until her unfortunate death was staying with Ben.

It is still unclear what caused Ben to commit the offence, but residents claim he left the house on the night of Sunday, May 30, 2021, after allegedly informing some relatives that the mother had travelled to Aflao in the Volta Region.

The Kwabenya Police indicated that a man who identified himself as Stephen Dollah, an elderly son of the deceased, reported of his missing mother to the Taifa Police on May 27, 2021.

The police said the complainant reported that his younger brother, Benjamin Kofi Yeboah, who was staying with the mother, claimed their mother had told him she was going to Aflao, in the Volta Region, but his checks proved she had not been there.

“He said at about 5pm on June 2, 2021, Stephen returned to the Taifa Police Station and reported that he was doing some renovations in his mother’s house and had to collect a heap of sand close to a portion of the fence wall to pave way for the work to continue,” the police said.

The police said the complainant claimed while he was collecting the sand, there was an odour emanating from the spot where the sand was being cleared, and he suspected his younger brother might have murdered their mother and buried the body there.

The police proceeded to the house close to the Dome Market Road and found a heap of sand believed to have been collected from the back of the house and used to cover the deceased’s body, close to the fence of the house, with a pungent scent coming from the place.

The police said their investigations revealed that Kofi Yeboah left the house on Sunday, May 30, 2021.

“The Crime Scene Management Team and the Municipal Environmental Health officials were invited to the scene after which the police also filed a motion at the Adenta District Magistrate Court to obtain a permit to exhume the body,” the police said.

The Public Relations Officer of the Accra Regional Police Command, DSP Efia Tenge, when contacted said on June 4, 2021 around 1pm, the police in the company of Ga East Municipal Environmental Health officials as well as Crime Scene Management Team visited the crime scene again and the heap of sand was collected and a body of a female adult wrapped in a lemon green cloth was uncovered.

The body was removed and deposited at the Police Hospital, Accra morgue, for autopsy.

She said that after the police had left the scene, the suspect was spotted around the scene by some neighbours, who arrested and handed him over to the police, and he is currently in custody.