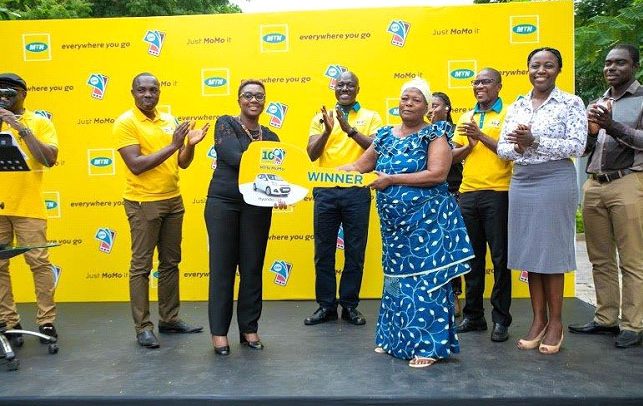 MTN MOBILE Money Limited has handed over a brand new Hyundai i10 saloon car to Madam Rebecca Tsotsoo Quaye, a 70-year old trader from Dansoman, for emerging the customer with the highest number of MoMo transactions for the month of June 2019 in the MTN MoMo @10 promotion.

An elated Madam Tsotsoo Quaye expressed her appreciation to MTN for acknowledging and rewarding her. She urged all customers to use MoMo primarily for the safety and convenience one can enjoy.

Eli Hini, General Manager of MTN Mobile Financial Services, expressed appreciation to customers for their loyalty to MTN MoMo over the 10 year journey and also congratulated the winners for believing in MTN to deliver on its promise.

He stated that MTN was rewarding the top 1000 MoMo customers every month over a period of three months.

Mr. Hini used the opportunity to advise customers of MoMo to remain alert and avoid scammers.

The MTN MoMo @10 promotion is a point-based promo. To win, one is expected to accumulate points during the month by carrying out transactions with MoMo. Transactions may include retail payments, transfers to wallets, data or voice airtime purchase and bill payments. The top point earners for each month will be awarded.  The points earned in a month are not carried over to the next month.  The promotion ends in August 2019.

Customers can check their points by dialing *120# or via the MoMo menu *170#. There are 9 more vehicles, Samsung TV sets and thousands of ecash to be won from now till the end of August.

Winners of the promotion will be notified through calls from MTN’s official contact number 0244300000. Customers should call the helpline by dialing 100 for further enquiries.