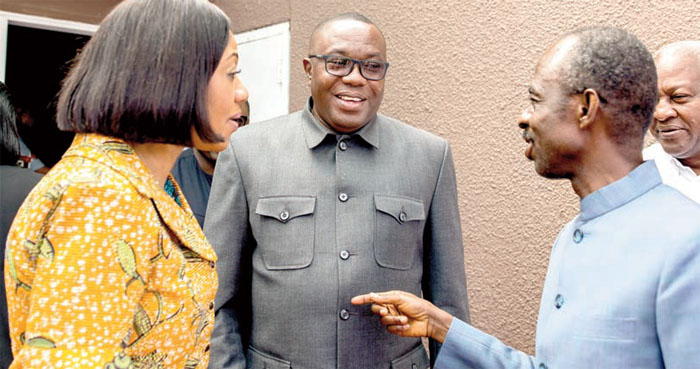 There was drama at a meeting between officials of the Electoral Commission (EC) and ex-President John Dramani Mahama held yesterday at the instance of the commission to seek support of past leaders for its activities.

As officials of the EC and executives of the National Democratic Congress (NDC) made their way out of a closed-door meeting at the ex-President’s office at East Cantonment in Accra, General Secretary of the NDC, Johnson Asiedu Nketia, was heard telling the Chairperson of the EC, Jean Mensa, that “you’ve stopped being fair” to which she (Ms. Mensa) quizzed “how can anyone be unfair over there (EC)?”

Before the commencement of the meeting, the trusted aide of the ex-President, Stan Dogbe, forced journalists to handover their phones before entering the meeting hall after all pleas had fallen on deaf ears.

The development was a sharp departure from the two previous meetings the EC had with former Presidents – Flt. Lt. Jerry John Rawlings and John Agyekum Kufuor – when journalists sat in from the beginning of the meeting to the end.

During an initial meeting which was witnessed by journalists before the closed-door session, Mr. Mahama urged the EC to ensure that the integrity of the 2020 general election is protected without any claims of rigging.

According to him, there were issues arising out of the 2016 elections that needed to be addressed going into the 2020 polls, saying it was imperative that those concerns were addressed to ensure that whoever wins in 2020, it would be treated as the free expression of the will of the people of Ghana.

He also urged the EC to ensure ‘confidence’ in the stakeholders in terms of providing a level-playing field for all stakeholders.

Acknowledging that he had worked alongside the EC Chairperson in helping to shape Ghana’s democracy, Mr. Mahama encouraged Ms. Mensa to continue to work in the manner she did when she was with the IEA.

Embattled NDC National Chairman Mr. Ofosu-Ampofo, who in a leaked tape called for “ruthless war” against Ms. Mensa, strangely told the EC that contributions from stakeholders, particularly political parties, were not intended to undermine the commission but to support its work.

He said it was hurtful to sometimes realize that a contribution from a political party aimed at improving the work of the commission is considered as an act of undermining the EC.

For instance, he said the NDC’s suggestion to the EC not to rely solely on the online registration process was in good faith and was in order to make the commission succeed “because if you succeed, the whole country succeeds.”

Ms. Mensa told the ex-President that the purpose of their visit was to, among other things; seek his support and partnership for the activities of the commission.

She said it was also to bring the commission to the doorstep of the opposition NDC and to create a platform for dialogue.

Mr. Mahama assured the commission that the NDC as a party would “continue to play that pivotal role to ensure that our electoral process is enhanced.”

After the initial welcome remarks, the ex-President urged journalists to leave the meeting room for a ‘heart-to-heart’ closed-door meeting with the EC officials.

There was tight security at the meeting and policemen were barred from entry.

'Opuni Didn't Follow Due Process In Awarding Contract To AGRICULT'